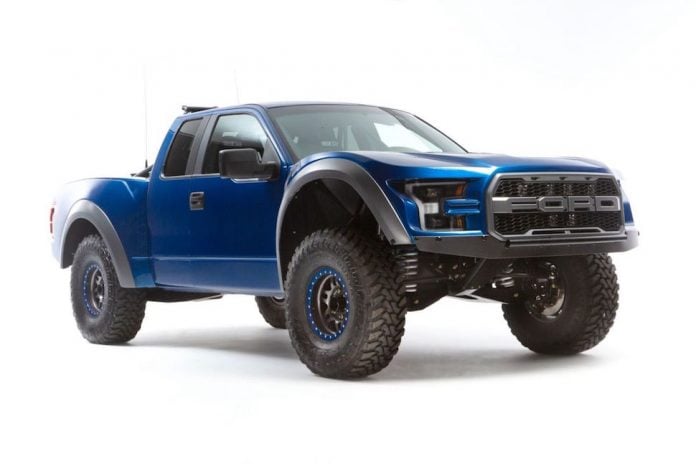 We sometimes wonder if the Ford Raptor owners hogging the roads these days realize their beasts have roots in desert-racing; trophy trucks working their asses off at the Baja 1000, showcasing true off-road chops.

One of the best examples we’ve seen is this insane Baja Raptor by Shelby. But this might just be outdone by the Raptor pre-runner pickup built completely from the ground up by the team at Raceworks.

This racer truck is basically an all-new Raptor, originally built in 2007 and redone for 2017 with upgraded everything from the inside out. Powered by a brand new Danzio LS 402 engine putting down 564-hp and 520 lb.ft of torque, the 2017 Raceworks Raptor Prerunner rides on PRO-AM Hubs and wheels paired to brake callipers and rotors by Brembo, with cooling duties handled by new radiators and coolers with wiggins / clamshell H2O Lines.

Inside, the centre stack resembles a fighter jet over a stock pickup with a clean layout of buttons below an integrated HDS 12 touch screen GPS. Everything in the cabin is new, including Sparco Powered Seats and seat belts.

Next time you see a Raptor cruising the streets, send this pre-runner feature — enlighten them, they may thank you.

Honda's big-selling compact crossover SUV gets decent updates inside and out for 2020. But compared to RAV4 & Escape, can the non-hybrid CR-V still compete?
Read more
Lamborghini