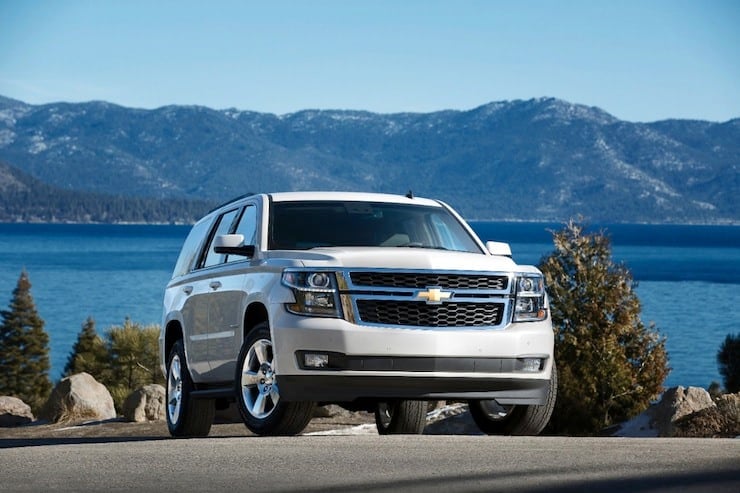 Make no mistake, the all-new 2015 Chevrolet Tahoe remains that unabashedly big, brawny full-size SUV we’re familiar with. But things are a bit different now — GM’s entry-level full-size Tahoe’s all grown up, into a more refined gentleman, if you will. Less beer more scotch, less Tip-Top more tailored suite (no offence). You get the point. And with many competing SUVs prescribing to the fluidic, rounder exterior looks (looking at you, non-Americans), the new Tahoe, in my opinion, exemplifies what a real, sculpted SUV looks like today. Pass the scotch.

The 2015 Tahoe is a departure from anything we’ve seen before, and we’re not talking the Blazer days. Now, the Tahoe has potential to attract a new, more enlightened crop of premium full-size SUV consumers seeking more than just cargo and convenience. Completely redesigned, the Tahoe finds a whole new level of refinement and sophistication, both inside and out. From better, tighter driving dynamics to increased fuel efficiency (from a V8) and a quieter, more connected cabin environment, the new model 2015 Tahoe has essentially grown into a more confident and refined specimen while retaining it’s versatility and brawn. But granted, the Tahoe’s boxy persona won’t suit everyone, safe to say the German fans.

Premium love, even for the Tahoe.

This year, GM has been on a bit of a tear with their redesigned lineup of full-size SUVs including the 2015 Cadillac Escalade and GMC Yukon. The Chevy Tahoe in particular, hasn’t seen an update in almost ten years, and frankly GM, that’s unacceptable. But all is forgiven, as General Motors today, having pulled out of the Great Recession not unscathed by criticism and hardship, is pressing hard going forward. From stepping up the interior fit-and-finish to improved road handling, the entry-level Tahoe benefits from this new charge of style and sophistication. Less obvious details like the hidden rear windshield wiper to the inlaid doors closing inside the new frame all contribute to a much cleaner, streamlined appearance curb side.

Granted, the new 2015 Tahoe starts at just under $52,000, whereas my top-end $72,845 Tahoe 4WD LTZ, including $3445 in options, enters the mid-level GMC Yukon territory (Cadillac Escalade? Add another $10,000-plus) the Tahoe has always offered exceptional value, as one of the best-selling full-size SUVs on the market. Tahoe Cabin Gets Plugged In

Up front, the centre stack is well-designed with a stacked layout including plenty of hard switches. The steering wheel feels good in the hands, however, the turn signal lever is way too close to the wheel; for bigger hands or while wearing gloves, this would be frustrating. Also up front, the 2-storage armrest compartment with a huge lid is handy, providing ample storage space with room for laptops — surprisingly, a feature not always found in other larger SUVs.

Driver front-and-centre, the instrument panel finds a clean, straightforward design featuring a large, easy to view cluster with a 4.2-inch colour driver info display standard on all Tahoes. The LT and LTZ get a much larger 8-inch colour touch screen in the centre of the instrument panel, with an ingenious motorized screen with a hidden storage cavity behind it. Why? Why not? Every seven-passenger SUV should include these stealthy features. Connectivity and technology are significant details in the 2015 Chevrolet Tahoe, including a feature we’ll probably see more of in upcoming vehicles: a wireless phone charging pad. Essentially, a magnetic inductive charging system (a small mat) you simply place your device on, and viola, your phone begins charging, without annoying wires. You know, one of those technologies we’ll look back at in twenty-years and collectively laugh at the days we use to plug stuff in. Dad, did you really carry cables with you?

A new more customizable and intuitive MyLink system is capable of linking up to 10 digital devices — so every family member can now enjoy their own music playlists on that road trip, and you enjoy the drive, in silence.  There’s all a new text messaging alert system for smartphone users with Bluetooth which reads incoming texts through the Tahoe’s speakers. Add, a bunch of USB ports (6 to be exact) and a new OnStar with 4G LTE and standard built-in WiFi hotspot, it’s clear the 2015 Tahoe has made huge strides in passenger comfort and convenience. And happier drivers.

Again, in a market of fluidic, quasi-bubbly full-size sport utilities (though it has gotten better as of late), the 2015 Tahoe is completely redesigned without probably feeling it — the new rendition still maintains those hard-lined, aggressive cues, but now, everything’s ironed out and looks smooth — due most in part to inlaid doors which fit into the body, and not over the top as before. End of the day, this not only creates smooth lines but also keeps all metal intact tightly to reduce driving drag, maintain a quieter cabin, and improve efficiencies overall.

A very nice option for $1,920, and found on my 2015 Tahoe tester, adds the power-retractable chrome accented assist steps. More of a luxury upgrade, but when your partner loves it and finds it convenient, it may be money well spent.

That invisible rear wiper blade, for some reason, completely reshapes the rear end design with cleaner lines and flatter, uncluttered surfaces.The tail light design is super-simple yet elegant and smart, without any crazy wrap-around styling effects.

The front-end is equally as modest with a stylish, simple dual-port grill design between well-designed projector-beam headlamps with LED daytime running lights on the LTZ — subtle LEDs that don’t over do it. The overall outcome is a bold, clean SUV with all the right proportions. You’ll like this car if … you’re planning long family road trips or perpetually shuffling soccer kids to and from practice.

For 2015, the redesigned Chevrolet Tahoe pretty much went under the knife — from sharp design to a more comfortable, techy cabin — the Tahoe’s new personality is all about refinement. You could buy the luxurious Escalade. Or keep the money, opt for the equally stylish and better-valued Tahoe, to tow your new boat.

The Nissan Armada Snow Patrol: Suburbs to the Slopes