Smokey Bear would be proud 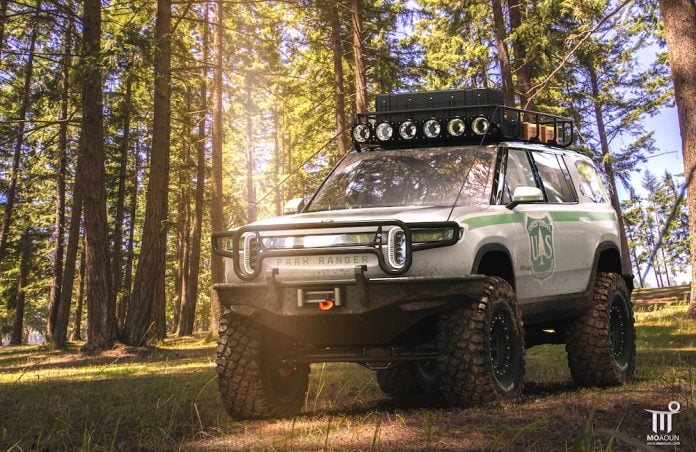 The idea of Forest Rangers patrolling the woods in an all-electric SUV makes too much sense, both from an environmental and sustainability point of view as well as on an efficiency level (gas stations in the forest?).

While this burly 7-seat SUV is only a concept by Seattle-based designer Mo Aoun, it’s based on a real machine — the RS1 by Rivian — so it’s not totally out of the question.

More on the Rivian R1S

Built on the all-electric R1T pickup platform launched late last year by the California-based company, the RS1 all-electric full-size hauler finds power via quad motors, will do 0-60 mph in a mere 3-seconds while providing up to 410 miles of range on 105 kWh to 180 kWh battery packs.

But unlike the clean, well-mannered R1S we first saw last year, this 4×4 concept takes things to another level.

The Forest Ranger Edition Electric SUV rolls on blacked-out wheels wrapped in huge all-terrain BFGoodrich T/A tires. A front-end winch isn’t as heavy-duty as we’d expect, but hey, maybe it would do the job. The front grille guard protects those small headlights while the roof-mounted light bar up top should provide all the light necessary in the deep woods.

Clearly, this beast sits much higher than the stock variant, and gets a more practical and beefier front bumper, while up top there’s a massive roof rack to haul pretty much anything.

Aoun has created even more extreme off-road versions of the luxury Rivian R1S (check out his work here) which gets chunkier front bumpers and much bigger grill guard extending to the roof holding the spare tire.

But this US Forest Ranger patroller has enough overland appeal while keeping it classy and clean — it’s a government vehicle, after all. Also, we Aoun’s Rivian rendition would look way better than say a Tesla Model X version.

Let’s just hope when the Rivian R1S does hit the market, they consider something like this concept. We’re pretty sure Smokey Bear would appreciate it.

Check out our Hybrid and Electric Buyer’s Guide if you’re into non-gas powered vehicles.

A 2015 Defender 110 Pickup with some Project Kahn love