Summer Dreamin’: Hitting the Road with the Harley-Davidson Electra Glide 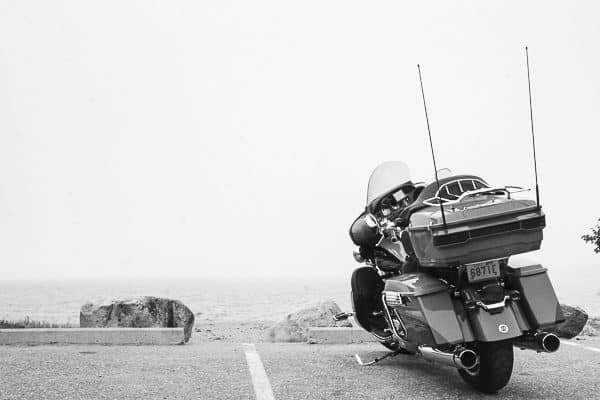 The dull fluorescent lights flicker and hum above me as I sit trapped within a labyrinth of grey cubicles, immersed in the dreary depths of winter. An endless sea of 9-5 drones outfitted in their own interpretation of business casual attire exchange equally inane clichés around the water cooler, then debate who among them faced the most challenging commute through rush hour traffic from the suburbs. I contemplate whether I am experiencing Déjà Vu, or merely reliving the same boring day over and over again.

I seriously debate the pros and cons associated with ending this unbearable suffering by pressing a stapler to my temple. Or, perhaps I could tighten my noose-like necktie further until I lose consciousness. I abort the most recent utterly preposterous and futile task dropped on my desk by my superiors, deciding instead to wander down to the cafeteria to acquire my seventh steaming caffeinated beverage of the morning. I don’t even like coffee. The journey necessary to acquire said drink however, gets me away from my desk, and in turn, the incessant nattering of a woman who shares my northern cubicle wall. Her high-pitched cackle sends shivers down my spine like nails on a chalkboard. I blend in seamlessly with a herd of co-workers filing blindly into the tiny elevator with the same mission. For the 9-5er, you see, coffee isn’t merely an indulgence, but a necessity. I can hardly keep my eyes open and am having difficulty feigning interest in the day’s many menial and pointless tasks that lay ahead. I look down at my watch anxiously, hoping dreadfully that it will somehow magically be closer to lunch time than I expect. Unfortunately it is only 9:07 on a Monday morning; welcome to life in the corporate world.

A mere six months prior, I was enjoying a far different experience. Having been laid off from a senior position within a moderately-sized corporation, I had run the gamut of emotions; shock, disbelief, anger, self-loathing, despair, and finally acceptance. With credit cards and loans piling up and job prospects looking dim as the economy continued its steep and swift nosedive, I figured I may as well embrace the opportunity to acknowledge a lifelong dream. After all, when else in my life would I have the freedom to traverse this great nation of ours by motorcycle.

A sunny August morning with nothing in front of me but the wide open Northern Ontario highway, I could tell it would be a good day.

Excitedly telling everyone who would listen of my upcoming coast to coast expedition, each person I told of my quickly approaching journey had the same advice; “Take the US route – it’s way faster,” not having any comprehension that for those of us who enjoy riding motorcycles, the journey and the destination can often be one and the same. Being patriotic enough to have our nation’s flag permanently emblazoned with ink on my shoulder, I had no intentions of dipping below the 49th parallel and every intention of experiencing as much of Canada as possible. Setting out bright and early on a Sunday morning, I kept a steady schedule consistently adhering to three basic rules; eat when hungry, sleep when tired, and coordinate gas fill-ups with washroom breaks whenever possible. Aside from these three fundamental guidelines and a plan to meet up with friends in Calgary, Alberta during the 2009 HOG Rally, the destination and details of my trip would largely be decided spontaneously from the seat of the CVO. Packing the saddlebags as the sun rose above my private cabin at the Glenview Cottages just north of Saulte Ste. Marie, I admired my two-day old facial scruff in the reflection of the gleaming red bike. It had been a long time since I was able to let it grow freely but was something I could easily get accustomed to. My mind wandered freely as I pulled swiftly onto the wide open two lane blacktop, which stretched as far as the eye could see. Being a Tuesday morning, the rat racers were chained to their desks leaving the roads free of any traffic whatsoever. A sunny August morning with nothing in front of me but the wide open Northern Ontario highway, I could tell it would be a good day. The only sounds that could be heard were of the 110 CI V-Twin roaring between my legs, and my newly acquired Allman Brothers CD blaring from the speakers of a 2010 Harley-Davidson Electra Glide Ultra Screamin’ Eagle CVO.

The only thing longer than the name of this badass flame-painted bike was the list of available options; cruise control, satellite radio – even heated seats and handgrips, which I would end up using more frequently than sunscreen while on this momentous pilgrimage. Occasionally precipitous and chilly, my journey was not ruined by the unseasonably poor weather I encountered, for even the worst day spent out on the open road is significantly superior to the best day spent at the office. Inclement conditions quickly separate the fair weather riders from the truly dedicated, and debatably unstable. If nothing else the days filled with grey skies and rain made me appreciate those where the sunshine warmed my face all that much more. The visceral experience of riding is something that people either openly embrace as Gospel or disregard as absurdity. This is precisely why America’s oldest living motorcycle brand has a vast and unquestionably devoted cult-like following.  “This here is the king-daddy emperor of grand poo-bahs,” explained Harley-Davidson’s Rob Sheal as he walked me around the monstrous machine at the onset of my journey. He wasn’t kidding. No matter where I stopped for sleep or sustenance, an adoring crowd of onlookers would gather. Often riding from sunrise to sunset, I rarely tired of being behind the handlebars of this beautiful beast.

The only thing longer than the name of this badass flame-painted bike was the list of available options; cruise control, satellite radio – even heated seats and handgrips.

My wistful thoughts return to that glorious trip once again, as I stand over a temperamental photocopier that insists there is a paper jam when there is in fact not one. Smooth, sturdy and obedient, the 906lb Hog is right in its element as I hum along the Trans Canada highway. I celebrate this by sliding my well-worn black leather riding boots up to the highway pegs as there won’t be a streetlight, or any form of civilization for that matter, for miles. A euphoric meditative state washes over me and a giant smile graces my face. I think about all of my friends who are missing out on this perfect moment as they sit in an office with their eyes glued to a computer screen. Their loss.

While I witnessed plenty of scenery fit for framing and gained a renewed appreciation for this beautiful country and its people, the highlight of my experience came quite unexpectedly. Without warning about 90 kilometres from Medicine Hat, after tirelessly battling violent rain showers all day, a break appeared in the dark, brooding clouds. For what seemed like an eternity, I was treated to the most beautiful sunset I have ever seen in my life. Still pouring with rain behind me, the glowing sky reflected a rainbow wall that showered relentlessly behind me. With the fresh post-rain prairie air rushing against my bare face, a blanket of vibrant orange and pink hues created an otherworldly halo of light that surrounded me and my machine for as far as my eyes could see.

Now that the economy seems to have moderately recovered and I have returned to the 9-5 office life, I long to feel the unadulterated freedom and exhilaration of moments like those once again. Desperately yearning to quench my insatiable wanderlust and embrace the ever-seductive horizon, I daydream every day about the next time I can shed my corporate skin and set off on another adventure. Haunted by the restrictions and structure of my clean shaven, pressed suit workaday life, I cling to the memories of that ride to help get me through each and every day. Until the next time I can set out on such a journey, these memories alone will have to suffice.

Dustin Woods
For the better part of a decade Dustin has been contributing automotive, motorcycle, travel and lifestyle content to the likes of The Toronto Star, Robb Report, Motorcycle Mojo, Sun Media, Motorcycle.com, Moto123.com, Inside Motorcycles, HOG magazine, BMW Motorcycle Magazine, Modified Luxury & Exotics and Performance Auto & Sound. His passion for adventure and love of speed has taken him on a journey not for the faint of heart.
FILED UNDER:
MotorcyclesHarley-Davidson Motorcycles

Polaris’ three-wheeled autocycle gets its biggest update for 2020 since hitting the streets five years ago. A 25-hp increase, lighter, and improved cabin.
Read more
Harley-Davidson Motorcycles

Timeless styling at a decent price, Royal Enfield releases the Classic 500 in the Stealth Edition at under $6,000. Blacked-out scrambler with retro vibes.
Read more
Harley-Davidson Motorcycles

Harley-Davidson's electric motorycle is finally here just as EV bikes are now coming onto the market at scale. How will the 2020 LiveWire hold up?
Read more
Gear

LEGO immortalizes the new 2019 Harley-Davidson Fat Boy as a 12-inch long, 1,023 Creator Expert set due out early next month for...
Read more
Motorcycles

If you're in the market for a Kia SUV or crossover, here are all 5 models you need to know about. Including Soul, Seltos, Sportage, Sorento & Telluride.
Read more
Ford Explorer