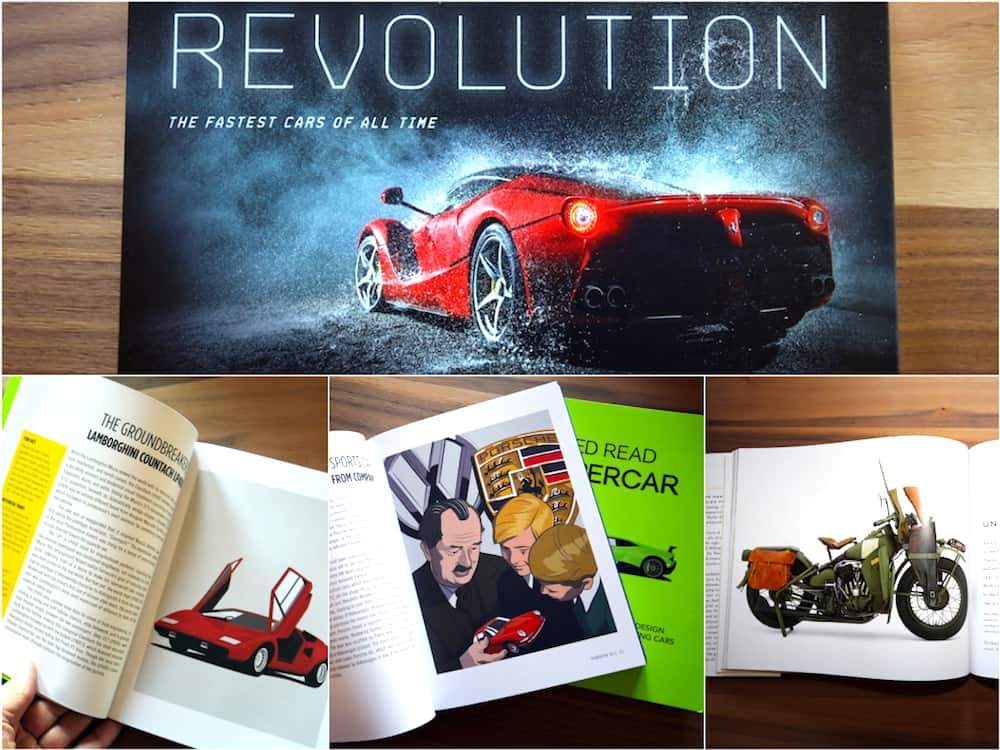 As a teacher I recognize how important it is to maintain a connection to books and the practice of reading. Books are portable reference materials, a source of entertainment, and most importantly, a solid educational tool.

Well they also make great gifts. Especially for those individuals with an interest in automotive and mechanical topics. I have recently had the opportunity to peruse a wide assortment of titles that I feel would appeal to motor enthusiasts and book aficionados alike.

Below, we pick 6 titles worthy considering. Ending with more books we’ve featured in the past.

The Complete Book of Pontiac GTO: Every Model Since 1964.

For the muscle car aficionado I suggest The Complete Book of Pontiac GTO: Every Model Since 1964.

Author Tom Glatch and his wife Kelly travelled far-and-wide to compile a well-researched archive of each and every model of the car that is responsible for kicking off the muscle car craze. The book has been crafted so that each model year of the GTO gets its own chapter complete with a brief history, changes in styling and features, mention of significant events and milestones, and an eclectic mix of both factory and original photographs.

As a reference tool this book will come in especially handy as Glatch has thoughtfully included dimensions and performance data (the latter with reference details), and of course, production totals – by body and by powertrain.

Add to this a foreword by Bob Lutz, former Vice Chairman of General Motors and the man behind the development of the GTO, and you have a book that any Pontiac or muscle car fan will relish.

For the younger reader or for those looking for a book that can be read in short spurts I would suggest any of the titles in the Speed Read series produced by Motorbooks.

These mid-sized paperbacks focus on either an iconic model of automobile or a particular segment of the motorsport or automotive world.

What makes these books so interesting is the wealth of information that has been packed into such a small package. Casual readers with little or no knowledge of any of the topics covered by the books in this series will emerge with a solid foundation of facts, details and history in short order.

For those who consider themselves an expert in any of the topics, I suspect that they will appreciate the depth of research and detail that each author has put into these books, and I am willing to bet these readers will come away with at least a few new tidbits of information.

I found the F1 edition enthralling, as it explained the function and purpose of many of the technological advances attributed to the sport in plain language giving me a better understanding of how these features work.  It also offers a condensed look at some of the many driver rivalries that give Formula 1 such a colourful history.

Priced at a reasonable CAN$25.99 each, the Speed Read titles would be a welcome addition to any enthusiast’s library.

Supercar Revolution: The Fastest Cars of All Time

Supercars represent the halo machines of the automotive industry, and apart from being the fodder of our dreams, these lithe speed machines serve as rolling test and development beds for the cars we will drive in the future.

Supercar Revolution: The Fastest Cars of All Time is a slick coffee table book which offers a unique look at the evolution of the supercar as the world’s leading marques compete to produce cars that represent the pinnacle of performance and design. The book has been divided into three sections to signify what author John Lamm considers to be the three eras of supercar production –  1967-1978; 1983-1991; and 1992 – present day.

The photography is exceptional and the book is filled with loads of details and design studies. It also features an assortment of terrific profiles of the people behind some of these cars…

The first section, titled The First Wave, provides an in-depth look at the cars that became the foundation of this lofty niche – cars like the Lamborghini Miura and Countach, Ferrari’s Daytona and Boxer, and the Maserati Bora. German offerings include the venerable Porsche 911 Turbo and the ultra rare BMW M1.

The Group B Connection is section two, and it explores the connection of road-going automobiles that were designed to allow the manufacturers to compete on the track in the short-lived FIA Group B category for sports cars and rally machines. Ferrari’s trick F40 and 288 GTO are represented, as is the iconic Testarossa.

Oddities like the Vector (several iterations) and Bugatti EB110 are showcased as is the Jaguar XJ220, Porsche 959, Lamborghini Diablo, and the Acura NSX. The latter is labelled as a 1991 vehicle in the section, but the majority of the write-up and all of the images feature the more recent second generation hybrid model. Strange, but still worth the read.

Section Three focuses on The Modern Supercar Era. This heady list is long and impressive and begins with the McLaren F1, the car that personifies the supercar classification for most.

It also includes 19 other dream machines from brands such as Ferrari, Pagani, Maserati, Ford, Saleen, Porsche, Lamborghini, Bugatti, Mercedes-Benz, Aston Martin, Lexus and Chevrolet. The inclusion of some of the models in this section will seem odd to purists, as will the absence of cars from brands like Koenigsegg, Gumpert, Henessey, and Audi.

I suspect that the cars included in the book are the ones that the author had personal experience with rather than an attempt to include every car classified as either a supercar or hypercar.

The photography is exceptional and the book is filled with loads of details and design studies. It also features an assortment of terrific profiles of the people behind some of these cars, as well as the people lucky enough to drive them – including Jay Leno. If you have a supercar aficionado in your household, this book is worth considering.

North Americans love their motorcycles, and there are two brands with a long history in our marketplace – Harley-Davidson and Triumph. Both brands have established immense followings largely due to our cultural connections to their countries of manufacture.

Harley-Davidson motorcycles come from the United States while Triumph manufactures their venerable Bonneville in Great Britain, a country still tied to Canada on both a political and cultural basis.

For fans of the British bikes, Triumph Bonneville: 60 Years is a celebration of one of the most iconic motorcycles ever produced. Author Ian Falloon tackles this subject from its roots in post-war Great Britain to its success on the track, as well as its emergence as a cultural icon worldwide.

The Bonneville name reflects the model’s dominance in speed trials at the Bonneville Salt Flats in Utah, with the bike holding the world speed record for fifteen consecutive years! This book offers a thorough history of the model as well as a look at its design evolution and the influence it had on other Triumph models as the company enters its 60th year of Bonneville production.

Bonneville fans will appreciate the author’s inclusion of technical specification charts for the majority of the bikes featured in the book as well as a plethora of examples of advertising posters and literature.

Apart from its prominence in the speed record books, the Bonneville holds a special place in popular culture due to its connection to a wealth of celebrities like actor Steve McQueen and renowned stunt man Evil Knievel. These are explored in this book as is the demise of the both the company and the model and the eventual rebirth of both.

The Harley-Davidson Story: Tales from the Archives

Harley-Davidson can trace its roots back to a simple drawing penned by draftsman William Harley dated 1901. The drawing was a sketch of a concept he had been working on for a motorized bicycle, and it would prove the spark that would bring Harley and his close friend Arthur Davidson together to create what we now know as one of the most influential motorcycle companies in the world.

While there have been hundreds, if not thousands of titles written to tell the story of Harley-Davidson and its many products and corporate history, it is this book – The Harley-Davidson Story: Tales from the Archives – that stands apart from the collective.

Author Aaron Frank has approached the story in a visually-driven format by supporting the tales and historical accounts contained within with pictures of significant artifacts from the Harley-Davidson Museum in Milwaukee, Wisconsin.

The end result is a book that will satisfy even the most demanding Harley-Davidson enthusiast and will likely instill a desire within to travel to Wisconsin to visit this outstanding museum.

Virtually every car enthusiast has a connection to Hot Wheels, the 1:64 scale die-cast toy cars and trucks that have been a staple in the toy department since visionary Elliot Handler and his company Mattel introduced them in 1967.

In the book Hot Wheels: From 0 to 50 in 1:64 Scale we learn how Handler, the president of operations at Mattel, was seeking to develop a line of small scale die-cast toy cars to compete with rivals Matchbox, Budgie, Dinky, Corgi and others, who were already producing tens of millions of miniature cars each year.

This book includes a couple of comprehensive timelines, as well as a look at full-sized versions of the cars, special editions and features, and the fine art of collecting.

However, Handler and his wife Ruth, herself responsible for the development of the Barbie doll, were on a mission to get their small car product on the shelf. Together, they assembled a team of the most creative people they could find, including actual car design specialists from Chrysler and General Motors, as well as a Yale-trained engineer.

The goal was to raise the bar in the segment, so Mattel personnel purchased examples of every play car they could find. Upon close examination the team felt that the current cars were primitive in design and manufacture, drab and uninspired. Hot Wheels were going to be different.

The plan was to create wheeled toys that were exciting, colourful, and “jacked up” on wide tires and over-sized wheels. In essence, these toys would convey the growing hotrod culture that was emerging in California and beyond.

Introduced at the 1968 New York Toy Fair, the Hot Wheels toy car became a runaway success, largely because of its ability to zoom down the track and survive a crash, over and over again. Cheap to buy, but big on quality and built to last, Handler’s little vehicles have emerged as the top selling toy in the world.

Author Kris Palmer takes the reader on a journey that explores 50 years of Hot Wheels production and the evolution of both the product line and the community and culture that surrounds it.  The book includes a couple of comprehensive timelines, as well as a look at full-sized versions of the cars, special editions and features, and the fine art of collecting.

This book will appreciated by readers both young and old and is a terrific reference as well as memory booster.  As an added bonus it comes wrapped in a cool vinyl case which helps it stand out as something special.