Pursuit of Happiness: 1997 Eagle Talon with 850-plus Horsepower 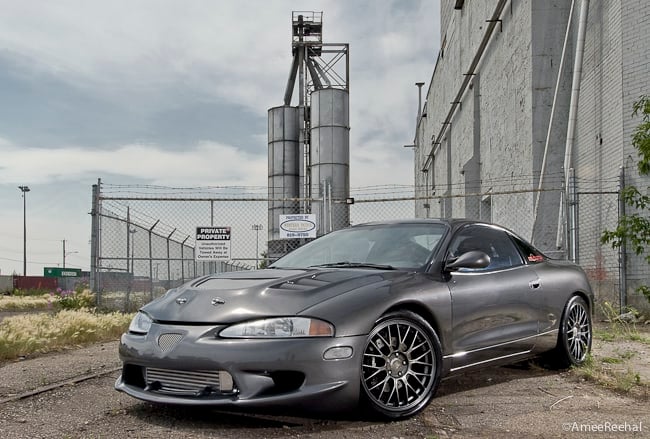 An 850-plus hp 1997 Eagle Talon literally built to perfection by its owner.

People will go to any length in the pursuit of happiness. Sometimes this involves blood, sweat, and tears. But more often, this involves the easiest, quickest, and usually the least-cost effective path. Legs too skinny, get some calve implants! Feel old and getting sad, just buy that drop top red Miata (and get those frosted tips in your hair too)! The tuning world is a little more reasonable, where enthusiasts will drop loads of cash on the best possible parts available to attain their performance goals. But what if they don’t meet your standards, or worse, constantly break down which can often be the case? Well, if it makes you happy, make your own.  This is exactly what Ron Korolak from northern Alberta, Canada did. He has invested six gruelling years into his 1997 Eagle Talon TSi AWD, completing nearly all the work himself along with a few select friends. “Everything on the car was only designed to take 200 crank HP, and putting out well over 850 crank HP (on the dyno) hasn’t been easy on any of the power or drivetrain components.” Ron continues,  “This car has broken almost every part imaginable over the last six years. From low quality rods, to clutches, to ripping the rear end clean off the car on more than one occasion. People see cars like this but don’t realize the ton of hours, time, money, and heartache it takes to get to this point.” For those who don’t realize the blood, sweat, and tears that go into a project like this, let’s break it down (so to speak). Tackling the engine, Ron opted for the parts that would give him the most results. Realizing the parts were not available, he made his own. The real challenge, however, was finding the clearances allowing him to make well over 730whp and still remain reliable. “I broke several aftermarket rods until I found the strongest ones,” he states. Over the years, he kept a record of all the clearances, motor specs, and other relevant measurements until attaining the right combination allowing him to push the Talon’s limits. Using an uncommon displacement motor for a DSM, the Talon put down 730hp to the wheels with 600lbs-ft of torque. Achieved running medium boost levels only and no nitrous. The drivetrain was upgraded and reinforced to deal with the excessive power. For instance, the stock syncros within the gearbox would constantly wear out, resulting in the car not slipping into gear under power. The solution was a DogBox transmission supplied by John Shepard Racing. Ron exclaims, “I was dealing with destroyed syncros in the tranny for years, which resulted in missed shifts. Since I installed the DogBox gears from John I have never missed another shift or had another tranny related failure.” Switching to a twin disc clutch over the regular single disc also helped. With the help of friend Will Lacelle, the two have recently fabricated a new rear-differential housing to replace the stock differential which was apparently being ripped apart upon launching at the track. This DSM has seen more fabrication than Joan Rivers. So it’s worth listing some of these items: the downpipe, the exhaust and intake, intercooler piping, valve cover, oil filter housing, intercooler end tanks, the rear differential, the battery and intercooler hold downs, the oil cooler, fuel system, the alternator relocation to the back of the engine, removal of all wiring under the engine bay, and the list goes on. Ron’s first two cars were both early model Honda CRXs. And both were all-show no-go. To avoid this path again, all of the Talon’s exterior parts are for performance purposes while maintaining a clean overall style. All moldings have been shaved off, including the antenna. The stock turbo wing and all emblems are removed to retain the clean look.  The paint is custom, and the VIS carbon fiber hood, VIS carbon fiber hatch, and roof are all painted to match. Other exterior parts include M3 style mirrors and a custom air vent in the front bumper. The clean and simple theme carries into the interior where a majority of the parts have been custom fabricated. This includes the dash, the seat mounts, and turbo timer pod. The largest interior fabrication, and certainly the largest headache, was the 10-point cage. Dave from Trimble Performance helped with this one-off, and the challenge they had was getting the cage into the car without compromising too much interior space. The A-pillars on the cage consist of 14 individual bends, proving to be the toughest bit of fabrication on this project. A healthy list of high-end I.C.E. components once weighed this beast down, but has been replaced with the old tuner stand by: basic CD system with door and rear speakers. It’s probably worth noting this DSM ran the quarter mile clocking 10.4 seconds @ 144mph—with functioning heater, lights, wipers, windows, sunroof, etc. The mandate for the suspension was optimal traction. And the JIC suspension was the clear choice. All the stock bushings were removed, which proved to be a painful yet worthwhile process in the end, and replaced with urethane bushings. The wheels are 18” OZ Racing-Supraleggra, wrapped in 245/45/18 BF Goodrich, front and rear. “Putting that much power down on 18” tires, and thanks to BF Goodrich, I was able to find a street tire that could harness over 730whp” Ron explains, “and the Willwood brake setup is incredible…this car can turn and break with some of the best sports cars out there.” The front brake assembly includes Willwood 4 pistion calipers with 13” rotors. The rear fitted with 12” AEM rotors. Establishing a 9-second pass on these 18” street tires, Ron’s next move is to throw on some slicks to produce even faster time slips (in addition to upgrading the turbo, fuel system, and increasing the boost). So whether you’re getting a nose job, a new 9-5 job, or a custom paint job, do what makes you happy man. The old adage, ‘if you don’t like it, do it yourself’ certainly rings true for Ron and his incredible ’97 Talon. Unsatisfied with the parts available, or lack there of, he set out and created his own. From a simple turbo timer pod to a rear differential, he invested the time and energy into something others would never even consider. But hey, whatever makes you happy.