Her name is Lucy Panzer and she’s a burly, globetrotting 1984 GMC Suburban

South Africa to Norway to Beverly Hills - this old Suburban has seen a few places. 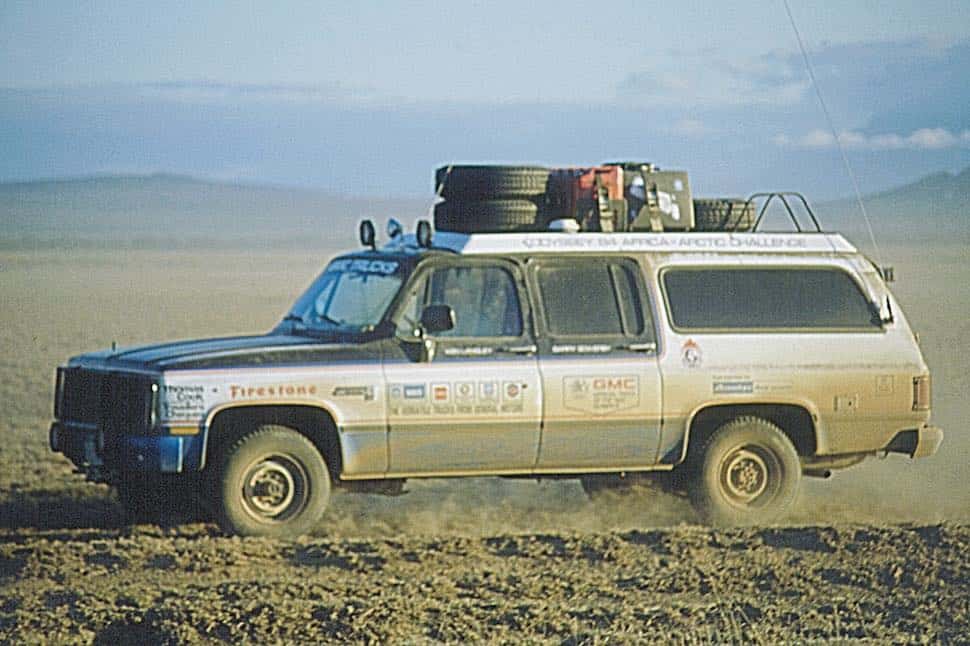 Not much sleep that Fall night. About two or three hours I reckon. But it was worth it since I was having such a great time with an old friend I hadn’t seen in years.

Of course it was a Road Trip. The sixteen hours from Nashua, New Hampshire to Halifax, Nova Scotia gave us a chance to get caught up on some of the outrageous times we spent together back in the 80s when, for a while, we were inseparable.

Sure she had aged a bit, but she was as spirited as when I was last with her at a Hollywood Gala years earlier. She still turned heads wherever we went and although she smoked for the first few hours, by the time we hit Maine, she put the habit to rest.

Perhaps she realized how tense it was making me, or maybe she was getting used to the new injector pump they bolted into the cleavage of her V-8 Detroit Diesel before she left Los Angeles for our New Hampshire rendezvous. Yes, Lucy Panzer, the eight thousand-pound 1984 GMC Suburban, in which college crony Ken Langley and I finessed our way through a lifetime of dicey situations between South Africa and North Cape, Norway, still had the goods. Even after four years of hanging around Beverly Hills’ prestigious Petersen Automotive Museum she was still unrefined and noisy with craggy road manners. But for her size, she handled surprisingly well.

I had slipped into a time warp. All those toggle switches. The forest of antennae on the roof. The smell in there, like crawling into a favorite old travel trunk. Yellowed press kits featuring fresh-faced Ken and I posed in front of Mount Kilimanjaro with “NO FEAR” written all over our faces. That favorite John Prine tape hanging out of the tape deck, Springsteen’s “Born to Run” in the glove box with the sticky latch. Under the seat, the rock we used to prop up the tire jack on a rutted road in Kenya’s Kasuit Desert after bandits shot out a rear tire. I love that old truck.

I had run into the venerable beast by surprise. The folks at General Motors had invited me to one of their media events in New Hampshire so I flew down and spent a day driving trucks around road courses set up at the New Hampshire International Speedway. I had a ball. When else do you get a chance to drive a fuel oil delivery truck, a tandem dump truck, a moving van and another dozen variants around all morning? In the afternoon it was light truck time where I found myself blasting around the track in a 6-litre 300-horsepower Sierra pick-up truck. It had 25% fewer parts than its predecessor. It was fast, quiet and smooth. It was a far cry from Lucy Panzer.

At the end of the day, the organizers said they had shipped in a surprise for me. It was hidden around back of one of the pit garages.

“All right,” I thought. “A new Sierra. Or perhaps a Yukon to haul my family around in”

My wife, Lisa Calvi, and our three daughters would obviously be impressed when Dad pulled into the yard in a spanking-new GMC truck. They would cheer and realize I really did have good friends in far-off places.

Then I saw her. Lucy Panzer, listing slightly to port and riddled with bullet holes from that day in Kenya. With her scrapes and scratches showing through the fresh wax job, the truck reminded me of a scrappy puppy waiting for its owner at the dog groomers. And as I slid behind the wheel and fired her up, my want of shiny new metal evaporated.

That night, during a dinner at Searles Castle in nearby Windham, a fortune teller read my palm. She told me all the good stuff. I’d live a long and productive life. The relationship with my wife would last forever. My children loved me. They would live long lives too.

The next day as I drove through the Maine woods on my way to the Canadian border, a flood of memories filled my head. The wind whistle from the CB antennae. The growl from the special air intake installed for desert operations. The air horns. They were all still there.

Sure she had aged a bit, but she was as spirited as when I was last with her at a Hollywood Gala years earlier. She still turned heads wherever we went and although she smoked for the first few hours, by the time we hit Maine, she put the habit to rest.

I considered how life had unfolded since that harrowing day in the dusty Kasuit Desert back in 1984. I thought about all the roads, the meetings, the inconceivable places. The people along the way. My family.

Then I remembered the fortune teller’s parting words.

“One more thing. You have strange job, yes?”

Check out Garry’s awesome book Driven Mind to read more about his crazy tales as he drives around the globe. Garry Sowerbyhttp://adventuredrive.ca
Garry established his company, Odyssey International Limited, in 1979 with the mandate to beat the existing 103-day record for World Circumnavigation by Car. He and his then-partner, Ken Langley, accomplished this in 74 days in a 1980 Volvo 245 DL Wagon. Since then the 4-time world record holder has produced another 100 or so unique motoring activities travelling through more than 75 countries including “Around the Bloc in a week” celebrating the fall of the Berlin Wall, smuggling a truckload of children’s books to Moscow schools, putting a car on top of Toronto’s CN Tower and negotiating the perimeter of Iceland during its dark, inhospitable winter. Garry has a 25-year relationship with the Road, a history of innovative events ranging from establishing solo long-distance world driving records to producing memorable car rallies for groups of consumers as well as distinct product launches for automotive journalists.
FILED UNDER:
CultureCulture FeaturesNew SUV & CrossoversFull-Size SUV 8 Seaters