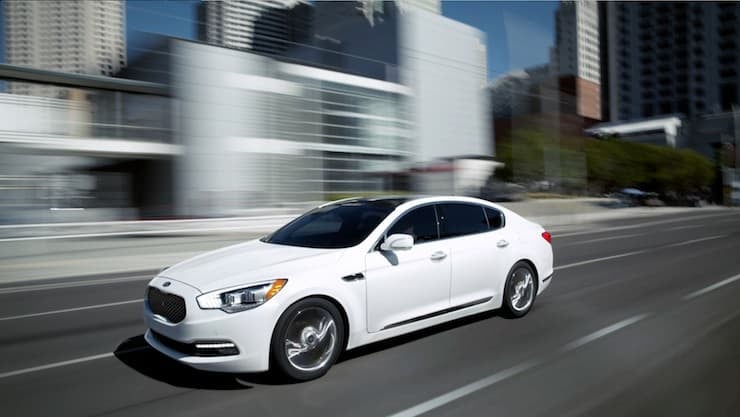 For 2015, Kia crosses a new threshold into the luxury sedan segment with the arrival of the K900.

Kia’s relationship with Hyundai has paid off in some big ways. For one, it ensured the survival of the brand (Hyundai kept Kia alive by buying up a stake in the company), but it also meant Kia got to use Hyundai’s technology. To this point, that’s meant mostly family sedans and crossovers based on shared platforms; for 2015, Kia crosses a new threshold, into the luxury sedan segment, with the arrival of the K900.

Just as Hyundai’s Genesis marked a move forward, so does the K900. While Kia doesn’t have a car based on the Genesis, this one shares much with the even-bigger Equus. “Go big or don’t bother” seems to be Kia’s mantra here.

This is a substantial car, a bit less generic-looking than the Equus, but bearing a passing resemblance to a Lexus LS – not at all a bad car to be inspired by.

What Kia doesn’t emulate is the LS’ price. Where that car is already a deal next to comparable European models, the Kia is an outright bargain: in fully-loaded V8 trim, the K900 prices out to $70,000 and includes soft-close doors, cameras that will show just about any view around the car, power-reclining rear seats with heating and cooling functions, adaptive LED headlights, power open/close trunk, head-up display and a suite of other safety features. And that’s just to start. Lexus’ LS can match many of those features, but at a price starting $15,000 higher. Performance: limited only by traction

Kia got the K900’s driving dynamics right: the car rides comfortably, but the suspension controls body motions well enough to keep things from getting too “floaty” at high speeds. Only those expecting a big sport sedan will be disappointed: this big car isn’t a sharp handler like big German cars, nor does it feel as solid at highway speeds.

The base powerplant is a 3.8-litre V6; my tester was a full-jam model with the 5.0-litre V8 under the hood. It’s a strong engine, powerful enough that it makes moving this car’s 2,100 kg feel like not much work at all. From a stop, squawking the rear tires is something to get used to nearly every time, and “laying rubber” is just a small amount of throttle movement away from that. If you’re so inclined, the K900 will perform a healthy burnout.

Only the ventilation system lets the car down, allowing too much traffic noise into the car, undermining Kia’s otherwise excellent efforts at keeping such sounds out of the cabin.

Not that Kia designed this car for such things. Instead, it’s about relaxed speed: let the car waft up to highway speeds to the sound of the engine’s tasteful exhaust note, then settle in and move swiftly along.

In fact, all that potential for noisy acceleration is quite out of character for a car like this, and could be all but eliminated with all-wheel drive, but it’s not even an option here. That could be problematic when the K900 is cross-shopped with that Lexus LS, the BMW 7 Series, Mercedes-Benz S-Class, Audi A8 or Jaguar XJ, all of which can be had with all-wheel drive (only Lexus makes it optional), these days considered a necessity when the practicalities of moving a big sedan around are concerned.

Once up to speed, the K900 impresses with its quiet road-going manners. Only the ventilation system lets the car down, allowing too much traffic noise into the car, undermining Kia’s otherwise excellent efforts at keeping such sounds out of the cabin. As mentioned, in V8 Ultimate trim, Kia decks this car out with most of the features you could imagine, and even a few I hadn’t expected. Up front, both seats are heated and ventilated, the driver’s seat gets a power bottom cushion extender, all mirrors are auto-dimming, and navigation is standard across the line. It’s the back seat that really surprises: both outboard rear seats have a power-recline function and are also heated and ventilated, there’s a powered rear window sunshade, and the three-zone air conditioning includes separate controls for the rear seat. A 360-degree camera setup provides views all around the car to aid in parking, and all four doors are soft-closing: pull the door just hard enough to latch it, and an electric motor does the rest. For the driver, the instrument cluster is a thin-film transistor type, meaning that what look like traditional gauges are actually graphic representations, which can be toggled to digital speedometer and tachometer displays when the car is set to sport mode.

Far from phoning it in and plunking a random big sedan at the top of its lineup, Kia has created a true luxury car in the K900, stacking it with features that normally cost tens of thousands of dollars more; what’s even better is that they’ve done it with a car that’s very pleasant to drive, arguably even more so for those riding in the back seats.

Only all-wheel ​drive would make the K900 perfect, but given that Kia has made such a good impression with its first foray into the luxury segment, it’s an omission we’re willing to let slide – for now.