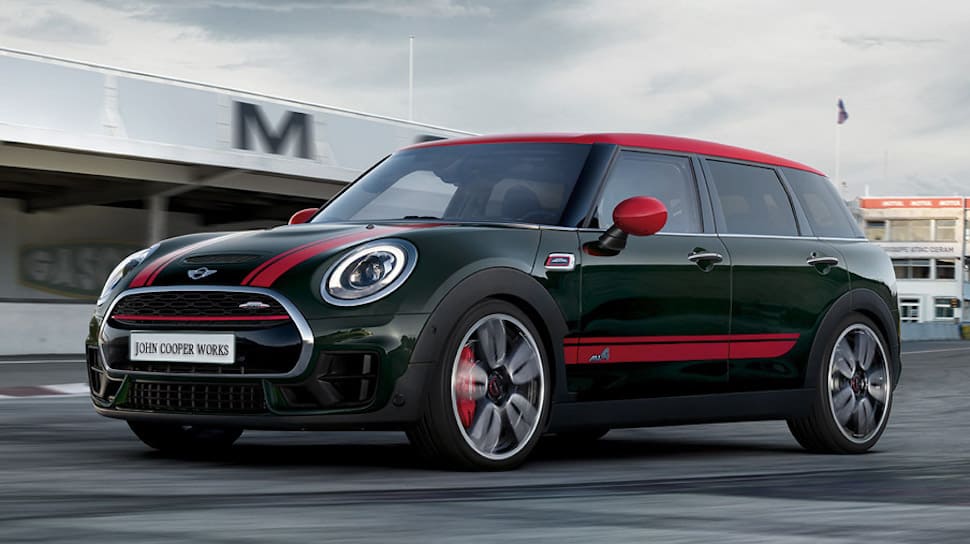 The most powerful of the Mini Clubman bunch, we get behind the wheel of the 228-hp 2017 Clubman JCW All4 model

The Mini name may still convey a sense of compactness and minimalism, but everything about the modern version of this iconic British brand is bigger than it used to be.

BMW is responsible for that, having taken Mini over nearly 20 years ago so that the German company could expand its reach toward a more budget-oriented demographic. There are now five distinct Mini models, all of which dwarf the first BMW-built Mini Cooper of 2001, never mind the toy-like original that dates back to the 1950s.

Where the Clubman fits in the model lineup

In the middle of that range is the Mini Clubman. Introduced in 2008, it was BMW’s first attempt at creating a Mini that was a realistic (if not ideal) way to transport four adults. It did that with a weird, rear-hinged door on the passenger side and a cargo area accessed through a pair of side-hinged doors in place of the liftgate you’d find on any other small hatchback or wagon.

Mini went more mainstream with a larger, second-generation Clubman in 2016. Now there are four proper doors for people and a rear seat whose only optimistic notion is squeezing grownups into all three seatbelts. But there’s plenty of room for four average-sized adults and enough cargo space to make this a feasible road trip vehicle. However many people tag along, the Clubman’s motivation comes from either a 1.5-litre turbocharged three-cylinder engine in the base model or a 2.0-litre turbo four in the Clubman S and in our John Cooper Works (JCW) tester, the most powerful of the bunch with 228 hp and 258 lb-ft of torque.

The 2017 Clubman’s most significant addition was an optional all-wheel drive system that for 2018 is now standard with all three powertrains. That’s good for traction, but it means this once-svelte small wagon’s weight is now within 100 kg of the larger Countryman and BMW’s smallest crossover, the X1.

As a result, our tester didn’t feel as quick as we’ve come to expect based on our past experience with JCW-tuned Mini models. It had less of a negative effect on fuel consumption, which averaged less then 7.0 L/100 km on a relaxed drive from Ottawa to Northern Ontario along Highway 17, impressive performance compared to estimates of 11.4/7.8 L/100 km (city/highway) with our car’s optional eight-speed automatic transmission. An automatic seems a sin in a car with such a sporty reputation, but this one is actually well-suited to the Clubman JCW, especially when you select one of the sport drive modes, which command quick shifts through closely spaced ratios. By contrast, normal and eco drive modes soften throttle response and force the transmission to upshift as early as possible to save fuel. The JCW’s generous torque means that the Clubman will accelerate smartly even when using those laid-back settings.

Cost and weight aside, we found ourselves charmed by the enthusiast-friendly Clubman, which provides a near-ideal combination of performance and practicality in a compact footprint.

The AWD system’s extra mass also means that while this is a sharp handler for a practical four-door, even this JCW’s stiffer suspension isn’t enough to recreate the go-kart feel of the old Clubman, never mind the Cooper hatchback.

Pricing for our 2017 Clubman JCW started at US$35,900 or C$36,900, a reasonable-sounding number until you consider that it doesn’t include niceties you might expect in an upscale car, like an auto-dimming rearview mirror, automatic climate control, heated front seats and a backup camera. Those were all extra-cost items in our tester which, along with features like excellent LED headlights, navigation and dynamic dampers that adjusted the suspension’s firmness through the drive mode selector, drove the as-tested price to C$45,000. It’s also worth noting that the 2018 Clubman JCW is C$400 pricier. Cost and weight aside, we found ourselves charmed by the enthusiast-friendly Clubman, which provides a near-ideal combination of performance and practicality in a compact footprint. You’ll never hear us argue for any Mini model in terms of value for money, but if you want a fun way to transport a small family or a few friends, you won’t find many vehicles more compelling than the Mini Clubman. With no performance bump, the 2018 Honda Fit Sport adds black wheels, a chrome tailpipe, a subtle body kit & a black/orange interior, all slapped with a 'sport' badge.
Read more