Promising chassis let down by shortcomings in everyday usability. 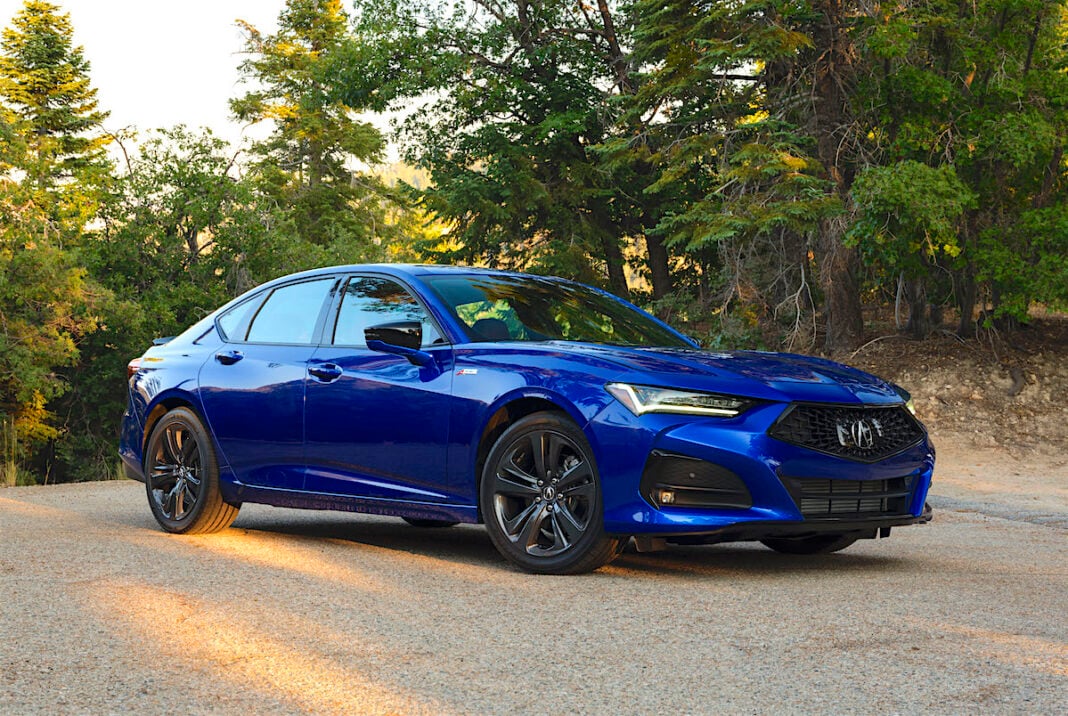 The 2021 Acura TLX replaces the first-generation car after six years in the market. During that time the shift from sedans to SUVs has accelerated, so much so that the TLX is now Acura’s largest sedan, following the demise of the RLX.

The Marysville, Ohio-made TLX gets an all-new platform to help it take on the established giants of the compact executive segment – BMW 3 Series, Mercedes-Benz C-Class and more. Also in its corner is a competitive price that rises slightly compared with the outgoing model.

In Canada, where all cars get Acura’s torque-vectoring Super Handling All-Wheel Drive (SH-AWD) system, the four-model TLX lineup starts at C$43,990 (MSRP) and maxes out with the Platinum Elite at C$52,190.

For now, a 2-litre turbo with 272 HP is standard on all models in both the US and Canada. A range-topping Type-S model powered by a new, 3-liter V6 turbo arrives in spring of 2021.

Even after its midlife facelift, the first-generation TLX was one of Acura’s less memorable designs. The new car is certainly more distinctive: lower and wider, with a long hood and a kicked-up C-pillar reminiscent of the Cadillac CT5 or the Genesis G70. The overall effect is leaner, more sporting and at its best in side profile.

The front end incorporates a similar grille shape to the one seen on the RDX and lighting cues previewed in the Type S Concept. There are ‘Jewel Eye’ LED headlights with four LED elements and bright white ‘Chicane’ LED daytime running lights that Acura says were inspired by the ARX-05 IMSA race car. There’s more chicanery in the rear light clusters and the A-Spec’s gloss-black decklid spoiler looks the part, but the elongated exhaust tips promise more than they deliver.

For us, the highlight of the A-Spec’s interior is the Ultrasuede and ‘Milano’ leather trim – a combination that’s unique to this grade. The bucket seats are very comfortable and the red stitching and piping works with details like the metal footrest to give the desired sporty look. There’s 12-way power adjustment for the driver but the driving position is fundamentally good, regardless.

Unfortunately, we found the cabin overall a little underwhelming. There isn’t the same luxurious feel as you’d find from one of the German premium manufacturers and the design concept simply didn’t feel very imaginative when you compare it with what FCA is doing with vehicle interiors, for example. Much of the switchgear feels very similar to a cheaper Honda’s.

There are two dominant items at the centre of the dashboard, and we weren’t sold on the merits of either. First is a 10.2in screen that’s controlled by Honda’s True Touchpad interface. The principle behind the pad is admirable – to reduce driver distraction – but as we found during our RDX review, it’s not as straightforward to use as we’d want. The voice recognition function may be the best way to go. No complaints about the connectivity to our devices, though, nor about the sound from the 17-speaker, ELS premium audio system.

The principle behind the Touchpad is admirable – to reduce driver distraction – but as we found in the RDX, it’s not as straightforward to use as we’d want. The voice recognition function may be the best way to go.

You’d be forgiven for the thinking that the system’s volume control is the huge rotary dial – the dashboard’s other arresting central feature – but that’s actually to select the dynamic mode (sport, normal, comfort or individually customized). It screams “performance sedan”, but its prominence is surely unnecessary. The small volume control, meanwhile, falls easily to hand next to the touchpad.

Acura notes that the new TLX’s 2-litre turbo engine delivers 13 lb-ft. more torque (for a maximum of 280 lb-ft) than the outgoing 3.5-litre V6, with a major increase at low revs – 48 lb-ft. more at 1,500rpm. Sadly, the power is delivered with a buzzy engine note that doesn’t sound sporting until you’re close to 4,000rpm. It’s not premium and it definitely doesn’t chime with the A-Spec’s performance aspirations.

The 10-speed automatic transmission works well with the engine, but we wished for something other than the pushbutton shifter setup on the centre console. In our view, rotary shifters are a more intuitive solution.

Acura describes the new TLX as “a sport sedan at its core”, with double-wishbone front suspension for more precise handling and cornering grip, as well as greater mechanical compliance for improved ride quality. The body is said to be Acura’s stiffest ever, providing a solid base against which to tune the suspension.

The result is a firm but reasonably compliant ride. Switching dynamic modes makes no difference to the ride quality on the A-Spec because only top-spec TLXs get the adaptive damping system. The bigger problem is road noise, however. Our test car, riding on Michelin Primacy A/S 255/40 R19s, roared badly on the highway.

The combination of the Michelins and SH-AWD proved great on slippery surfaces when winter weather suddenly hit Calgary. More generally, we felt that the TLX probably had hidden handling depth that was rarely able to show itself at everyday speeds in city driving. We’d have loved to take it on a track, where the crisp turn-in (albeit without much steering feel), NSX-derived brake system and SH-AWD’s ability to deliver rear-biased torque promise much.

Takeaway: our final thoughts on the 2021 TLX A-Spec

The TLX lacks the engagement at everyday speeds that you would hope for from a vehicle billed as a sports sedan. Perhaps more importantly, it has flaws that might make it frustrating to live with every day: road noise (worth exploring different wheel and tire combinations), an irritating engine note and the fiddly touchpad interface. But the TLX felt better the harder we drove it, and certainly sounded better, which bodes very well for the upcoming Type-S.

How much horsepower does the redesigned 2021 Acura TLX Type S put down?