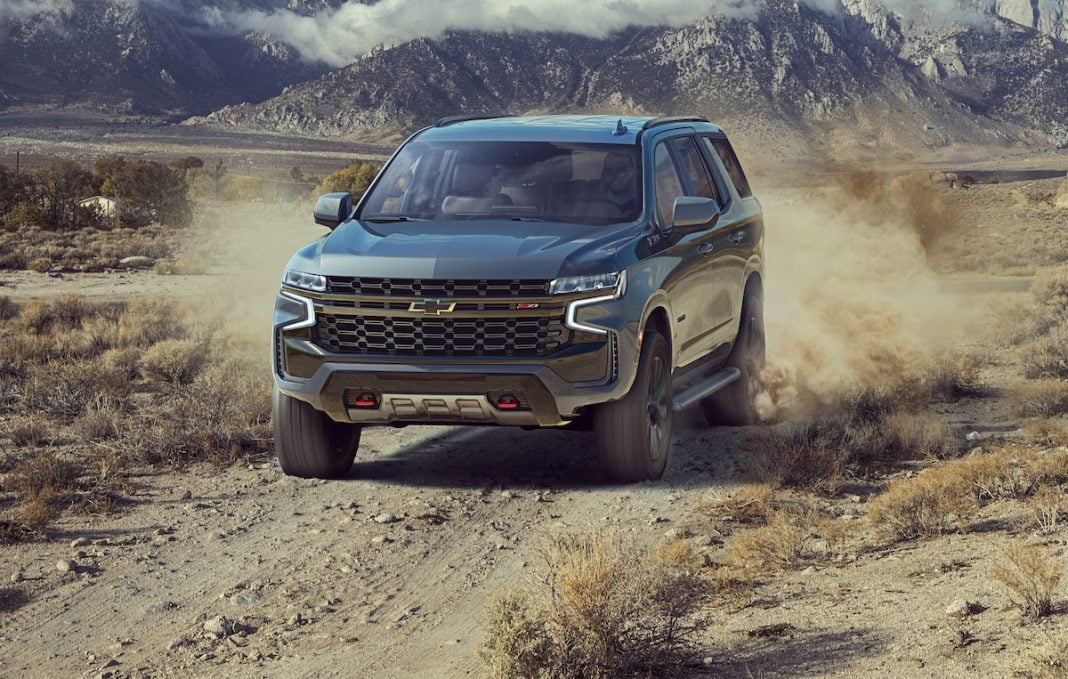 With the unconditional affection from North American families willing to quench their everlasting thirst for bigger and badder SUVs, Tahoes were still flying off the shelves in 2020 (like this 2018 Chevy Tahoe Custom Midnight) despite the inevitable fact that it was showing serious signs of aging.

For 2021, the bow-tied manufacturer treated it with a deep remodel, radical new looks, and also a series of novelties in the chassis and technology departments—including a well-deserved independent rear suspension that help the Tahoe catch up with rivals like the Ford Expedition, another big truck that’s already made the move to a more docile ride philosophy.

But our tester was fitted with the more conservative and yet still very powerful 5.3-litre V8 which churns out 355 hp and 383 lb-ft of torque. It uses less fuel than the 6.2 L and more then the Duramax, but let’s be realistic; the Tahoe’s target market doesn’t really make fuel consumption a deal breaker. On the other hand, this engine still lets the Tahoe tow 8,200 pounds—which is more than acceptable.

This mill and the Z71 package have been inseparable in the Chevrolet lineup since time immemorial. And our tester was also fitted with this package in question.

On the road: the Tahoe doesn’t have a hitch in its giddy-up

Even with the “lower-output” 5.3-litre V8, the Chevrolet Tahoe can handle itself with great response. We also have to thank the 10-speed gearbox that responds quickly and delivers the right gear at the right time. The new Tahoe truly benefits from its independent rear suspension. Our tester fitted with the Magnetic Ride control unit gave it that cloudy feeling on the highway, but enough reactiveness to follow spirited steering movements on winding roads—even if that steering component isn’t the most feedback-providing unit within the GM SUV lineup.

But the Tahoe also provides an effortless ride thanks in part to that last “flaw,” and it can easily be handled by the most novice of drivers. It can also somewhat delicately steer and hide in the most urban of settings without giving its driver headaches.

The Tahoe is now bigger (because, of course!) the wheelbase is up by 125 mm and overall length by 169 mm. This change went mostly to the benefit of the third row for legroom, which is up by a significant 254 mm. This also translates to a 66 per cent increase in cargo space behind the third row.

A new dashboard layout is showcased inside, giving drivers and passengers a cleaner and more modern feel. The outgoing Tahoe had a good old steering column shift stick which gave it that 90s “cool.” This component gave way to the more modern button-in-the-dashboard deal, which, to some, is much less satisfying to operate.

The on-board entertainment aspect is mastered by GM’s quick and intuitive the infotainment system – which is simple and effective. Finally, the cabin also benefits from more insulation, which makes the Tahoe a great highway cruiser.

Chevrolet is tweaking ingredients, but not changing the recipe for the Tahoe. And although it has evolved in a very good way, it hasn’t strayed away very far from its roots of a bulky and capable, do-it-all vehicle.

The Tahoe’s very close relative at GMC, the Yukon, also got the same 2021 revamp. And if you’re looking at both, know that General Motors branded the three-lettered brand its “Premium” designation, so you’ll pay $1,500 more for a base Yukon, which makes the Tahoe somewhat of a better deal because they have a whole lot in common.

Louis-Philippe Dubé
Louis-Philippe Dubé has been contributing to a variety of established motor outlets for years, including Quebec's Le Guide de l'Auto. His passion for everything automotive comes from a career as a mechanic, but also from the family vehicle collection that includes a 996 Porsche Turbo and a 2006 Ford GT.
FILED UNDER:
FeaturedNew SUV & CrossoversFull-Size SUV 8 Seaters