High-tech but trail-capable: Ford’s iconic Bronco 2-door is back with the Jeep Wrangler in its sights 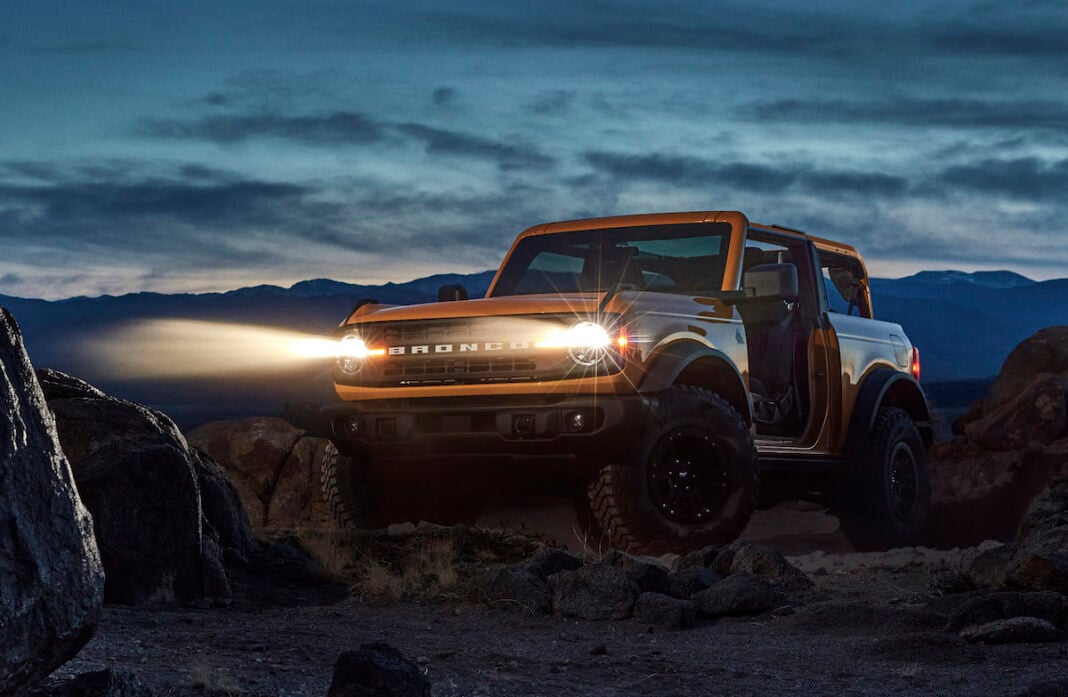 Few new vehicle debuts are as eagerly anticipated as that of Ford’s new Bronco, which is making its comeback after 25 years away. The 2-door and 4-door Broncos – including the 2021 Bronco Sport – will go into production in early 2021 with the first models arriving in Ford dealerships next spring.

Ford is capitalizing on the rapid growth in rugged utility sales to reboot a classic design. The look of the new 2-door taps into the enduring popularity of in particular the first generation, which ran from 1965-77.

The design team, led by Paul Wraith, even made a digital scan of a ’76 Bronco owned by VP of design, Moray Callum, to use as inspiration in the creation of the 2021 edition.

The resulting design carries clear links with the past, such as the short overhangs, squared-off styling and trail sights on the hood, but the new Bronco also packs a ton of tech, both mechanical and electronic, to help owners in their off-road adventures.

Beginning with the chassis, there’s coil-spring suspension at both ends – independent at the front, with a Dana AdvanTEK front diff, and via a Dana 44 AdvanTEK solid axle at the rear. Options include front and rear Spicer Performa-TraK electronic locking diffs for improved traction over rough terrain and long-travel, position-sensitive Bilstein dampers with end-stop control valves. An electronic disconnecting front stabilizer bar can also be specified for increased articulation.

An available Terrain Management System with what Ford is calling ‘G.O.A.T.’ (go over any type of terrain) modes should help drivers unlock the Bronco’s potential off-road. Up to seven selectable modes are offered, depending on the model, including Slippery and Sand, Baja, Mud/Ruts and Rock Crawl.

The durability of the off-road hardware was proved out in a program that went beyond Ford’s normal 10-million-mile testing demands and included some of the trails used for the famed King of the Hammers off-road race in Johnson Valley, California.

Electronic technology that would have been hard to imagine when the first Bronco was launched is also brought to the mix on the 2021 model. A Trail Toolbox includes Trail Control – cruise control for low-speed trail driving – and Trail Turn Assist to tighten off-road turning radiuses through torque vectoring. Trail One-Pedal Drive controls acceleration and braking from a single pedal to make life easier during slow-mode rock crawling.

Modern navigation technologies have been applied to the trails, too. Customers who opt for the 12in SYNC-4 infotainment setup, which also brings over-the-air updates to the Bronco, get seamless integration to the FordPass Performance app. This enables owners to plan, navigate and share off-road adventures on more than 1,000 topographic trail maps.

Meanwhile a neat dashboard rack was developed to hold your cellphone after engineers’ phones spilled off the dash during extreme testing!

Ford has built customization potential into the Bronco from the ground up – good news for owners who will want to personalize their truck, either from Ford’s catalogue of approved parts and accessories (more than 200 at launch) or from what’s sure to be an avalanche of suitable components from aftermarket specialists. Bronco is stamped into the bolt heads that are designed for removal – like the ‘F’ in Ford-made Jeeps during WWII – and the six upfitter switches mounted overhead have pre-wired leads to key accessory points.

Naturally the doors and roof come off. Ford has made provision to store the doors on board in bags – all four, in the case of the longer-wheelbase Bronco 4-door – so no need to leave them chained to a tree when you hit the trails.

The roof parts (three on the 2-door, four on the 4-door) have also been made smaller to ease handling. The roof crossmember has been moved rearwards on both variants to provide uninterrupted views for all passengers.

Both new Broncos ride on a modified version of the Ranger’s midsize truck architecture and will be built alongside it in Wayne, Michigan. That means 2.3-litre EcoBoost power as standard (expected to be 270 HP, 310 lb-ft of torque) but the Baja 1000-tested 2.7 V6 EcoBoost (provisional 310 HP, 400 lb-ft of torque) is also available.

The Bronco range has been packaged around different pursuits rather than steadily increasing levels of equipment. Note that the Sasquatch package, which increases the capability off-road with 35in tires, 17in bead-lock wheels, locking diffs and upgraded suspension, can be applied to any model. Here’s the list:

Base – for the purist, or as a base for customization

Wildtrack – the desert runner, designed for high-speed off-roading. Gets the 2.7-litre EcoBoost as standard

Badlands – billed as the ultimate go-anywhere Bronco, with front and rear locking diffs and the disconnecting stabilizer bar