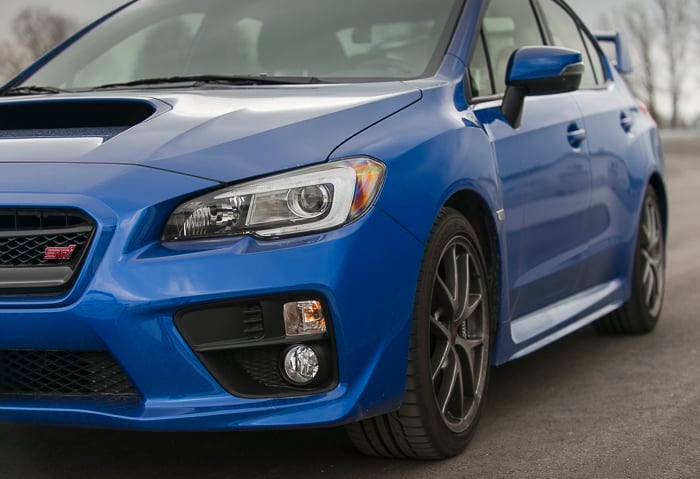 Veering off the conventional path is perhaps the best move towards continued evolution — where keeping up with the Joneses or chasing market share from the segment leaders isn’t really in the plan. Subaru’s recent decision to quit competing with Civics and Corollas, focusing instead on its strengths building high-performance, family-friendly, good-value vehicles is one likely to pay-off. Regardless, the all-new, all-awesome 2015 Subaru WRX and WRX STI have nothing to worry.

ALSO SEE: ALL OUR SUBARU REVIEWS Bowmanville, Ontario – Back in 2002, Canadians got their first taste of Subaru’s WRX, arriving here from Japan as 2nd-generation rendition. Fast forward today, now in it’s 4th-generation, the 2015 Subaru WRX and WRX STI arrives all-new, handling better and looking tighter. Redesigning an iconic car is surely difficult enough; but contending with the WRX-purists must be a completely different challenge. The new WRX and WRX STI strike the perfect balance between stepping-it up without going off-course, producing a WRX with significant improvements from cabin appointments to better handling (yes, it was possible). Gone is the hatchback and now only available as sedan, the 2015 Subaru WRX is operating leaner and definitely looking the part.

The WRX targets those who seek high-performance, value, and convenience whereas the blood-pumping WRX STI fills the void for the ultimate performance, total control seekers. The WRX is powered by a totally new turbocharged 2.0L DIT 4-cylinder engine, putting down 268-hp at 5600 rpm and 258 lb-ft of torque at 2000-5200 rpm. To realize a lighter weight exhaust system and emissions/throttle response improvement, the turbo is now mounted immediately under the engine. A plastic intake manifold reduces even more weight while improving airflow; and the addition of roller rockers for the valve actuation reduces friction and improves fuel efficiency.

Available in either a 6-speed manual or optional Sport Lineartronic automatic transmission with paddle shifters, the new manual setup now provides fifteen-percent shorter shift stroke and revised gear ratios offer a wider ratio spread than the 5-speed manual for quieter highway driving. The Sport Lineartronic transmission offers manual shifting via paddle shifters with 6-steps when SI-Drive is activated in the Intelligent or Sport Mode; and 8-steps when in Sport Sharp Mode. Both the SI-Drive > M-Mode and SI-Drive > D-Mode each offer additional operation modes.

The WRX targets those who seek high-performance, value, and convenience whereas the blood-pumping WRX STI fills the void for the ultimate performance, total control seekers.

Why bring the automatic back to WRX?  The reason is simple: to compete. And it’s been seven years (2008 WRX) since the car last had the option. With the likes of the Lancer, GTI, Audi A4, Genesis, to name a few, reintroducing the auto simply widens the appeal of the WRX by offering a performance-oriented automatic transmission. And we’re glad they did…especially with the Sport Lineartronic.

Behind the wheel (or on the street), you’ll notice the all-new 2015 Subaru WRX sounds a bit different now. By removing the cylinder chamber and shortening the pipe inside the muffler, the new WRX gets a more dynamic exhaust note. The WRX STI finds a stellar 2.5L turbocharged, 4-cylinder engine producing 305-hp at 5600 rpm and 290 lb-ft of torque at 4000 rpm, available in 6-speed manual only. Upgrades for 2015 includes a new intercooler tank changed to conform to the new body style; and a sound creator where the main intake stream leads to a sound creator, channeling engine intake sound into the vehicle cabin during middle to high speed and acceleration; from the intake stream the pulsation is divided and leads to the sound creator. Result? Glorious exhaust notes.

Also new is a completely remapped ECU, which was evident on the track where I realized balanced power across the rpm-band. The retuned ECU overall enhances accelerator response via precise tuning of the boost pressure control and other variables, leading to a smooth power band. This significantly improves the throttle response in all three driving modes.

New and standard in all 2015 WRX models is the Active Torque Vectoring. Essentially, a new technology that elevates the WRX’s handling abilities, making it more precise while allowing driver to push the vehicle when needed by responding to the steering input more immediately. We had an opportunity to test this out, throwing the WRX and STI into the corners of a small, pylon figure-8 track — as I entered the corner hard the lateral g-forces set in; the torque system applied braking force to the inside front wheel to keep me on my line. Comparing the 2014 WRX and 2014 WRX STI to the 2015 models during this track test, both 6MT and CVT, the impact of the Active Torque Vectoring is immediately realized; and frankly, making this new WRX that much more enjoyable, instilling confidence to push it to it’s limits, particularly in the corners at higher speeds. Paired to Subaru’s established sport-tuned chassis, the entire on-road handling system will exceed expectations.

Both the WRX and STI find upgrade brakes for 2015, including larger brakes up front from 294mm to 316mm with 40% more fade resistance. A high-response booster is more solid with a linear feel and improved responsiveness. The STI is blessed with a Brembo brake system. Design changes for 2015 are significant enough to make an impact yet subtle enough to avoid upsetting the STI purists. Only the roof panel and trunk lid are shared with the Impreza…everything else is new to the WRX. Notable changes to the 2015 WRX STI exterior include thinner A-pillars; a one-piece, nose-cone front end design; larger door openings; and increased trunk cargo volume (note: no more hatch option in 2015). The side mirrors are now located on the door opposed to A-pillar for increased visibility.

Big changes inside as well. Gone are the hard plastics, making an instant impact, now replaced by soft touch plastic throughout. Also new, a smaller diameter, D-shaped steering wheel, which when I compared to the 2014’s more circular wheel during my comparison, actually made a big impact, feeling more comfortable and sportier. Plus, adjustable head rest seats with larger bolsters also new (gone is the one-piece seat); a new multi-function display with new boost gauge; and hello to a premium Harmon Kardon sound system in the top trim WRX.