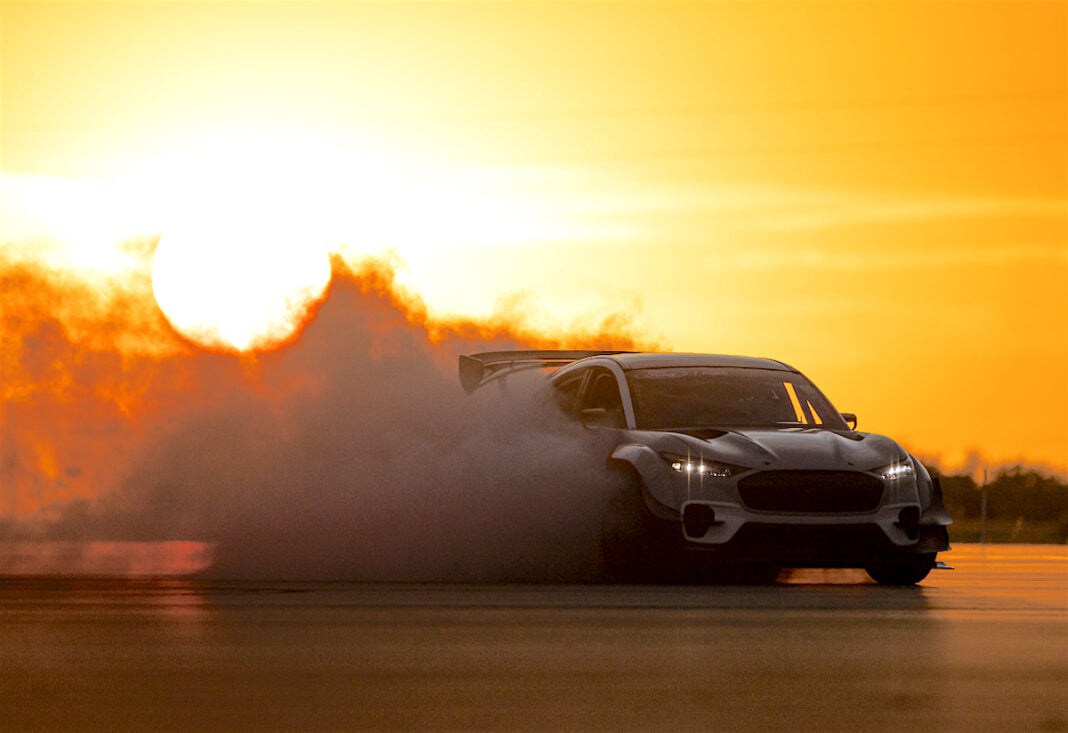 Ford’s first all-electric vehicle doesn’t hit showrooms until late 2020, yet the Blue Oval is wasting no time ramping up one of their most anticipated vehicles with the Mustang Mach-E. From engineers working on the prototype during the Pandemic to Ford recently announcing more power than originally anticipated for production models, work on the new Mustang SUV carries on.

But now, Ford has taken it too far with this absolutely ridiculous yet entirely awesome and badass Mustang Mach-E 1400 one-off prototype capable of double duty hitting the track and drag strip to dropping jaws at a gymkhana course.

When you have over $11.5 billion invested in electric vehicles worldwide, you can partake in outlandish projects like this. “Mustang Mach-E is going to be fun to drive, just like every other Mustang before it, but Mustang Mach-E 1400 is completely insane,” Ford accurately puts it.

Based on the top-trim Mustang Mach-E GT, Ford Performance and RTR Vehicles managed to garner 1,400 peak horsepower from the all-electric SUV by means of seven motors — 2 more than the stock GT. All laying flat, three motors are attached to the front differential while the two more fixed to the rear; with flexibility to take this rocket drifting or to the track for high-speed racing.

Related: RTR packs this Mustang with over 700 horses

The biggest challenge was handling this insane level of power and downforce at more than 2,300 lb. at 160 mph, integrating a setup that made sense in an otherwise nonsensical, completely bonkers fully-electrified Mustang racer — “a showcase of the art of the possible with an electric vehicle,” as Ford Performance director puts it.

Regenerative braking paired to the ABS system, an electronic brake booster, and Brembo brakes handles stopping power. Aerodynamics focused on the Mustang’s cooling ducts, front splitter, dive planes and rear wing; and that hood is made of organic composite fibers, in contrast this Mach-E’s carbon fiber body and exterior parts.

Over 10,000 hours were invested into this prototype, all in an effort to show the EV Haters what electric vehicles are capable of in terms of power and torque. RTR Vehicles’ founder sums up the Mustang Mach-E 1400 drive experience as “nothing you’ve ever imagined, except for maybe a magnetic roller coaster.” We could only imagine.

Expect the Mustang Mach-E 1400 to make its debut at an upcoming NASCAR race. If you’re interested in buying one — without the 7 motors and whopping 1,400-hp — check out our Mach-E page here with more updates, trims, pricing, and more. 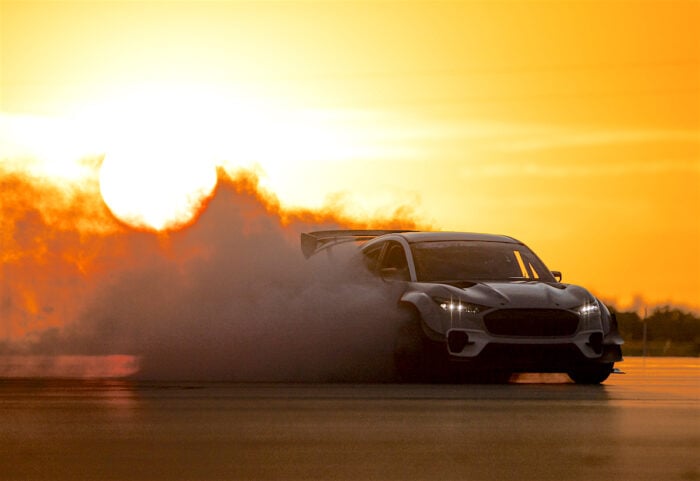 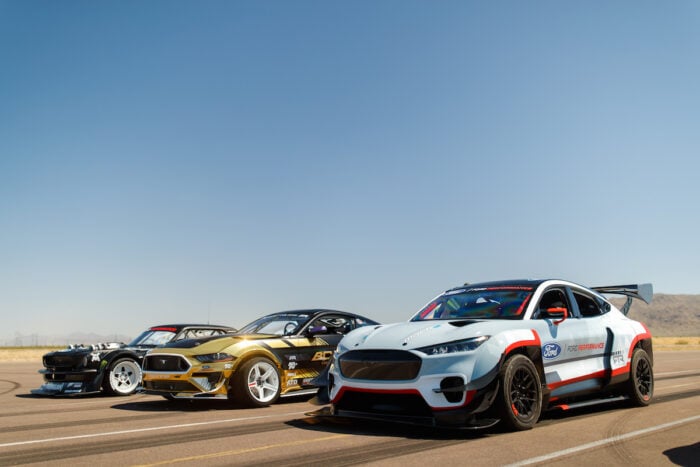 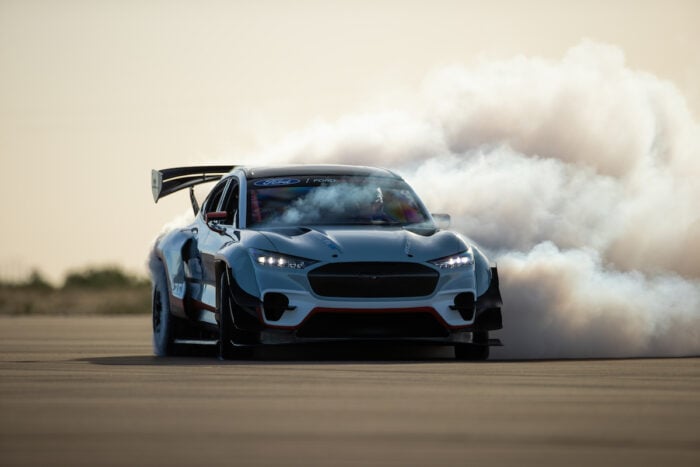 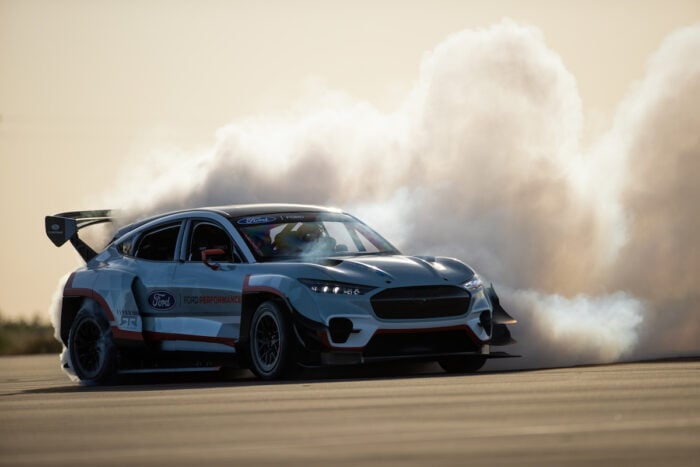 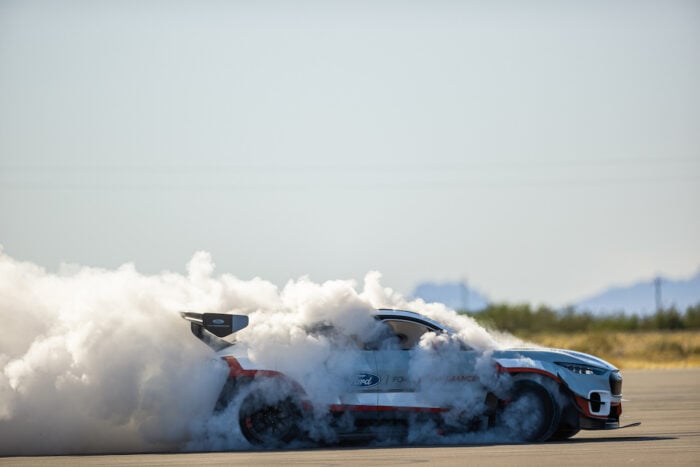 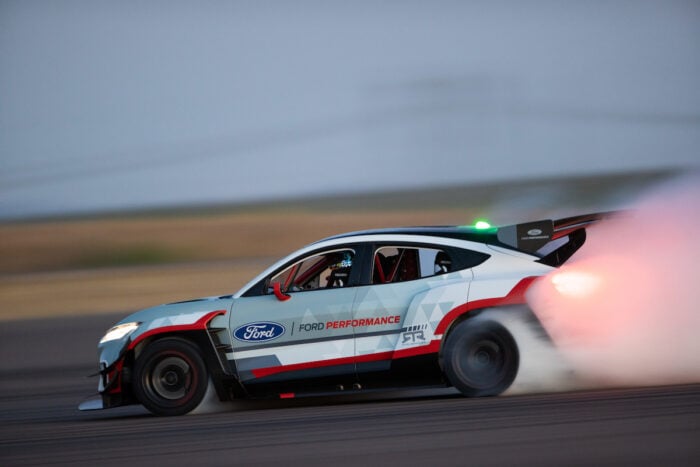 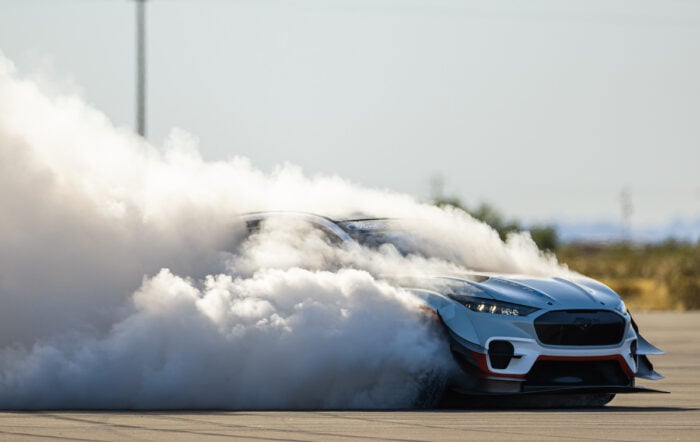 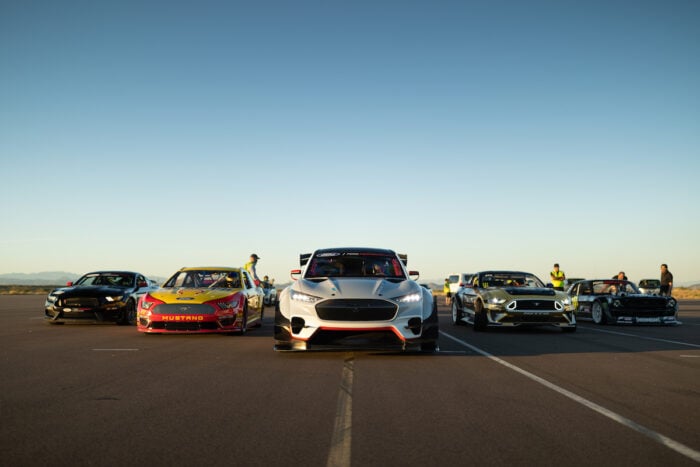 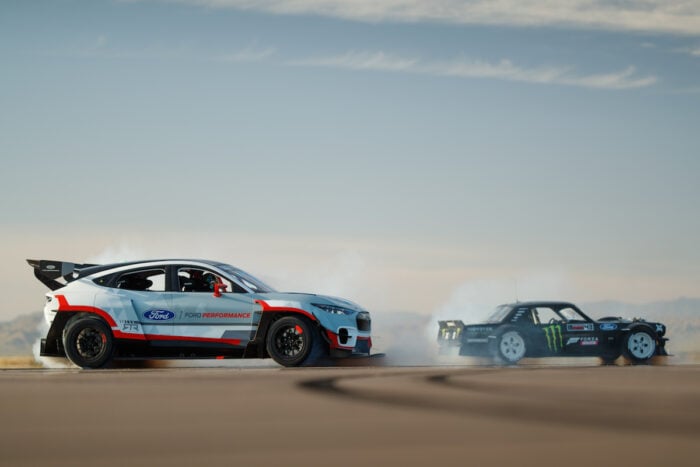 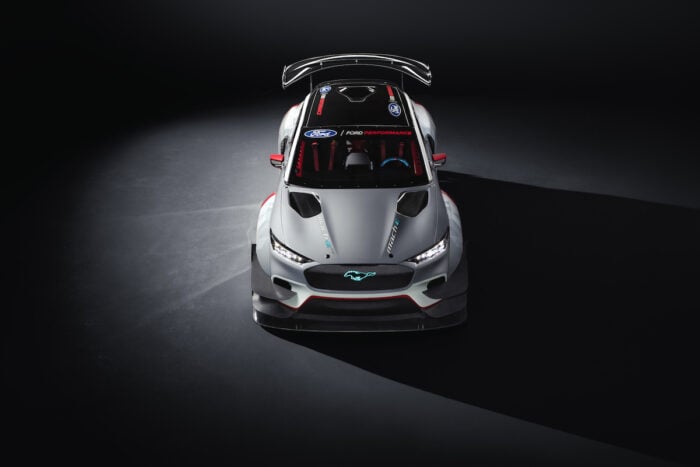 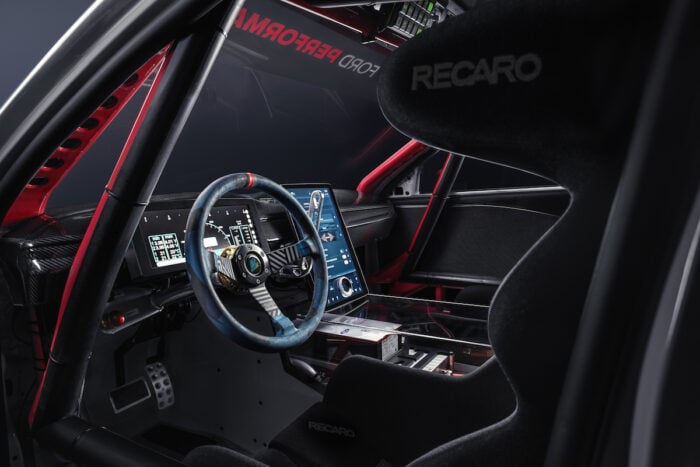 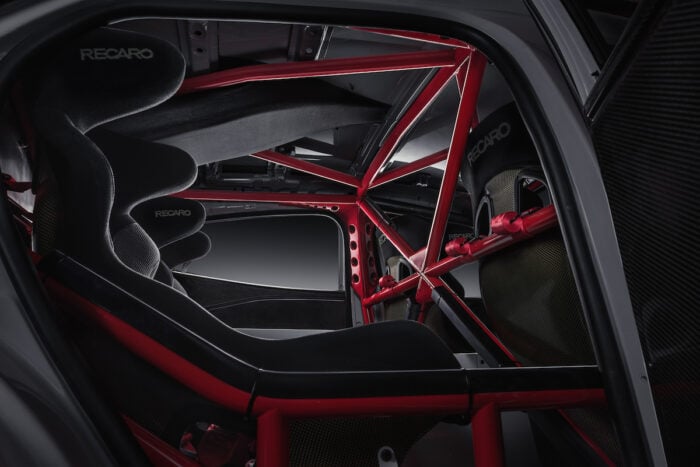 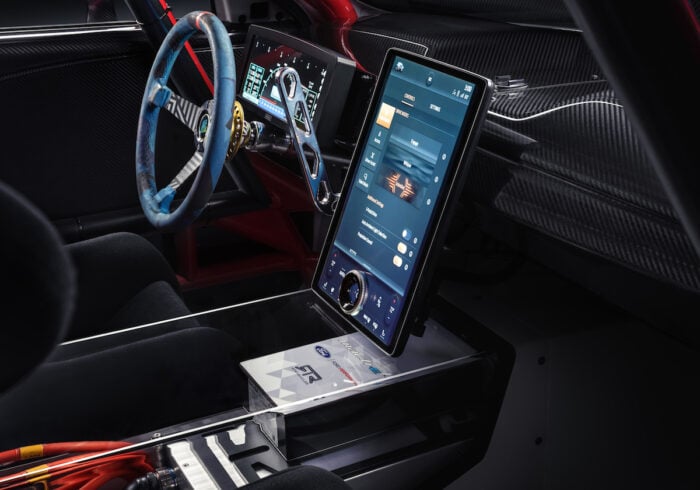 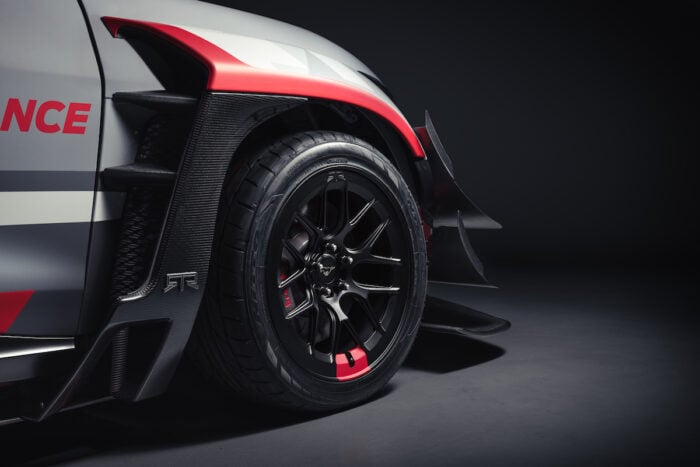 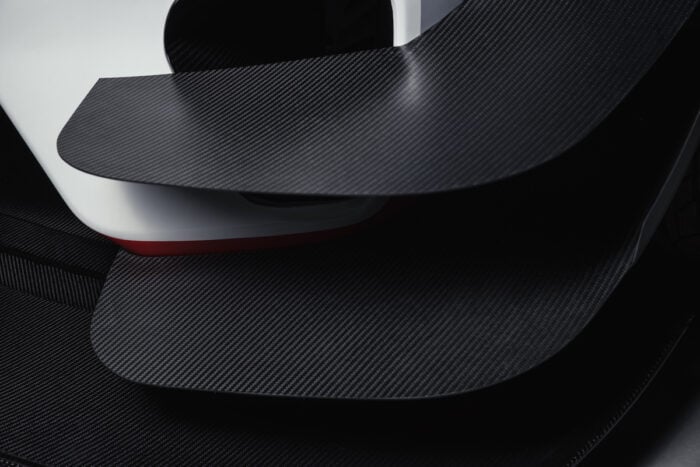