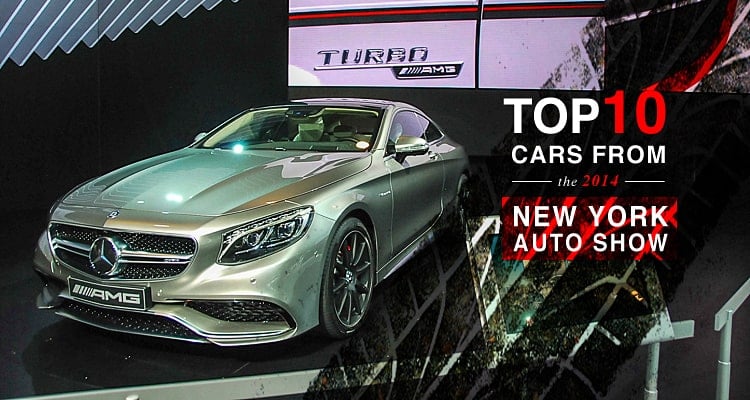 Big Apple, Small Bites: We head to the the 2014 New York Auto Show to see what’s good and upcoming.

The New York Auto Show, like all the other global motor shows, never really disappoints. This year was no different. Our editor-at-large, Mark Hacking, hits the show floor on preview day and gives us his 10 best debuts — from concepts to vintages and upcoming production vehicles we’ll actually hitting the roads. We hope. The lowest-priced model in the Aston Martin fleet is no cut-rate sports coupe—the V8 Vantage GT boasts race-inspired suspension tuning, a potent braking system and a top speed of 305 km/h. Starting at USD$99,900, this version of the Vantage could prove to be the most popular of them all. The Bavarians had a number of new vehicles on display—including the new X4 and M4 Convertible—but the car that spun my head ‘round was a 535i xDrive with a BMW Performance body kit. The black wheels meshed perfectly with the paint to create a mostly understated and slightly mean first impression. This concept has been around since the Stone Age—well, not really, it just seems that way. Originally unveiled at the Pebble Beach Concours d’Elegance last year, the Elmiraj is a flat-out stunning car with design features that have inspired the new ELR. Build it and they will come. First unveiled at last year’s LA Auto Show, this is possibly the most engaging car in the burgeoning Fiat 500 line. Offered in one of three classic colours—white, baby blue or light green—the 1957 Edition also features a sport-tuned suspension, manual transmission, and an ivory interior colour scheme with brown leather seats. This swoopier version of Infiniti’s flagship is a uniquely styled entry in the luxury sedan segment that now comes in a long-wheelbase version. Infiniti has been knocking on the door of the German carmakers for a few years now; if the driving dynamics of the Q70L match its looks, this thing will be an uncontested winner. First, we had the head-turning LC-LF concept; now, there’s the RC-F coupe to consider—a model slated for production and sale this year. Based on the IS sedan, the RC-F features a 5.0-litre V8, a track mode and Brembo brakes. Sign me up. The personal ride of Governor Nelson A. Rockefeller, this stretched version of one of the coolest cars of all time is absolutely menacing and utterly desirable. The Lincoln brand has just entered China—they should’ve kicked things off by selling replicas of this car. This year, Maserati celebrates its 100th anniversary and, in New York, the carmaker unveiled special editions based on the GranTurismo MC and the GranTurismo MC Convertible. Both are stunning and if you were forced to choose between the two, your head would likely explode. Of all the displays at this year’s show, one of the best was Mazda’s as they celebrated the 25th anniversary of the Miata/MX-5 with a fleet of the little roadsters. The stand was capped off by the MX-5 25th Anniversary Edition, a muscular version of the car that will sell out in no time flat. At the conclusion of the 2008 season, Subaru pulled out of the World Rally Championship and then faced a few years of being lost in the proverbial woods. But they seem to be embracing their rally heritage once again and this car, a carbon fibre-infused, 2015 Subaru WRX STI built for the Global Rallycross Championship, is proof of that fact.

What Exactly is a Car Alternator? 4 Questions Answered