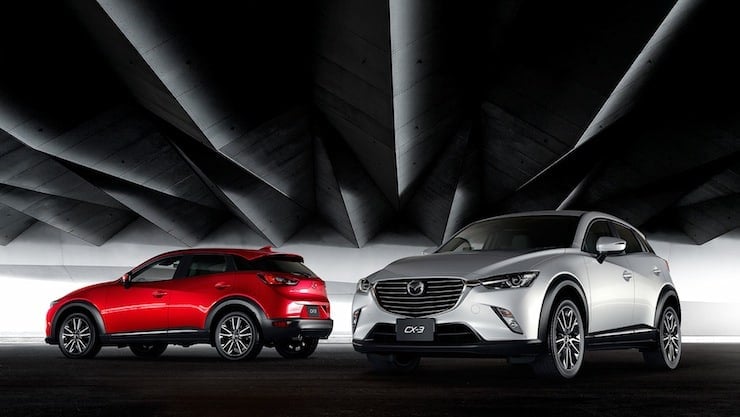 Mazda revealed the all-new 2016 Mazda CX-3 to the world, in a special event on the eve of the 2014 Los Angeles Auto Show.  The all-new compact crossover SUV is the fifth model in Mazda’s line-up of new-generation vehicles that feature the SKYACTIV Technology and KODO-Soul of Motion design.  With the global launch starting in Japan in the spring of 2015, and following in Canada shortly afterward, the CX-3 is set to become a core model in the automaker’s global line-up.

The 2016 Mazda CX-3 will be powered exclusively by a SKYACTIV-G 2.0-liter gasoline engine in Canada. Output details and specifications will be revealed at a later date, closer to launch.

Power will be transferred to either the front wheels, or through Mazda’s new-generation all-wheel-drive system, and CX-3 also will be equipped with Mazda’s unique SKYACTIV-Drive automatic transmission.  Because driving pleasure and driving safety go hand-in-hand, CX-3 will offer a wide range of Mazda’s latest active, passive and in-car-infotainment technologies, including the Mazda Connect infotainment system and i-ACTIVSENSE advanced safety features.

The Mazda CX-3 will be on display throughout the run of the 2014 Los Angeles Auto Show, along with the 2016 Mazda MX-5 which also makes its public debut at the show.  Additionally, the full lineup of 2015 model-year Mazdas will be on display, as well as special racing and one-off project vehicles.

Visit here for more on the Mazda productline

Ford Shelby GT350 Gets Optimized for the Track