When Does the 2020 Jeep Gladiator Go on Sale? 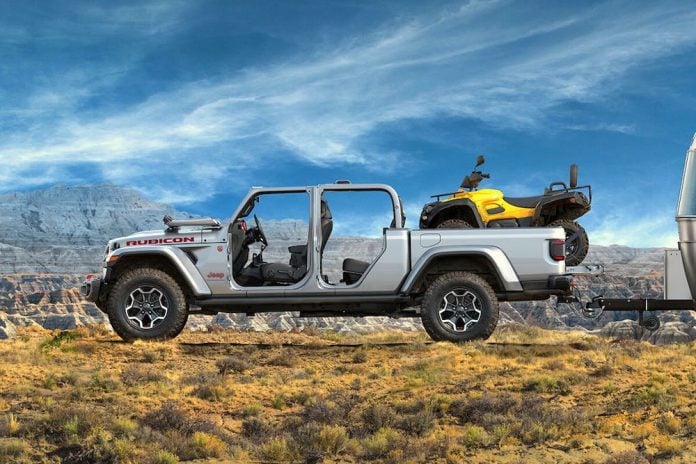 Jeep’s new mid-size truck is here – the brand’s first pickup since the Comanche (though we’ll forgive you for not knowing this).

Here’s our full review of the new 2020 Gladiator.

Good news, Jeep’s new pickup is now on sale across North America, as of early April. Bad news, with the current hype and predictable popularity we suspect back orders (but don’t quote us on that).

Today, April 2019 sales figures released show 300 Gladiators sold in the US and 7 in Canada. Not mind-blowing but you get the idea of where things are going.

According to U.S Head of Sales Reid Bigland, “We sold more than 300 Jeep Gladiators, which are now starting to arrive in showrooms across the country, and we expect our Gladiator count to continue to rise.”

Actually, the first Gladiators to go on sale were the Launch Editions which sold out in a day on April 4th, part of a one-day promotion in the US only; these were top-trim Rubicon models with some distinct badging. Only 4,190 were made available.

How much do they cost?

Gladiator trims include the Sport, Sport S, Overland, and fully-loaded Rubicon, all inline with the Wrangler.

Can the Gladiator tow?

According to Jeep, the Gladiator will offer the best towing capacity in its class. But based on our towing comparison, the Chevy Colorado is slightly better. Nevertheless, 3,470 kilograms or 7,650 pounds (in the optimum configuration) is pretty good for a small pickup.

Should you buy one?

Mid-size trucks are heating up across North America, with the return of the Chevy Colorado and Ford Ranger. You don’t need to be a Jeep fan to appreciate the Gladiator, but if you are, what essentially looks like a Wrangler with an attached box at the back (though it’s much more than that) this newcomer will suit you just fine.

If a glossy Jeep with all the bells and whistles is important to you, the Rubicon is the right choice but pricey, as Jeeps often are. But if a base model that’ll provide the same power, performance, towing and cargo abilities is what you’re after, the entry-level Sport makes sense.

Besides, once you take those doors off and hit the mountains, who cars about power windows and locks, right?

Got a Gladiator and need to tackle the white stuff? Jeep is offering the North Edition upgrade to the Gladiator Overland to tackle those frosty commutes.
Read more
Jeep

Only a concept right now, AM General's customized military-grade Gladiator mid-size pickup may see production in Spring 2020 based on interest and feedback.
Read more

A 1000-Hp Mid-Size Truck That Belongs in Your Garage

World Debut: 2020 Gladiator Pickup is the Jeep Outdoor Enthusiasts Have...

The Jeep Gladiator XMT Concept is a Military-Grade Fighter That May...