We knew an all-electric F-150 was coming, reviving Ford’s old Lightning nameplate, ditching that gas-guzzling V8 from the 1990s for something a little less, um, V8-ish (you’ll need to hold out for the upcoming Raptor R for that).

The 2022 F-150 Lightning will reach dealerships Spring 2022, and will be built out of Ford’s historic Rouge complex in Dearborn in a new high-tech, factory using sustainable manufacturing practices, according to Ford. Trims include the XLT, Lariat, and Platinum.

The commercial-ready version will start at $42,000, and that’s before tax incentives for going green. The XLT will go for $55,000.

In Canada, C$58,000 is the entry-level MSRP for the the commercial-ready version, with the more tech and comfort-heavy XLT model starting at C$68,000.

A pair of in-board motors power the electrified F-150, coupled with standard 4×4 so customers can still put the truck to work while taking advantage of the Lightning’s low centre of gravity for improved handling.

But unlike the rest of the lineup, the 2022 Lightning steps it up with a high-strength, military-grade aluminum alloy body coupled to a new independent rear suspension promising improved ride comfort for those longer journeys.

This setup is good for up 10,000 pound towing capacity (XLT and Lariat trucks with the extended-range battery and Max Trailer Tow Package) with a maximum 2,000-pound payload in the standard-range Lightning model.

This modern-era pickup will be Ford’s most torque-loving F150 to date at 775 lb.-ft. of instant twist, coupled with a targeted 563 horsepower and a 0-60 mph time in the mid 4-second range with the extended-range battery.

Two new F-Series first features: Onboard Scales and Phone As A Key

A couple features new to the entire F-Series includes something for the haulers and those losing their keys (not you, of course). Both are optional features, not standard.

To better gauge payload — in turn, realize better electric range — is the Onboard Scales feature utilizing the F-150 Lightning’s sensors to estimate payload and relay to the driver how much they’re hauling.

Phone As A Key does more than replace your keys with lock and unlock abilities, fortunately, allowing customers to also start their truck remotely.

Both features will take advantage of the Ford Power-Up software updates, bringing with it new and improved functionality over time.

Another new feature for the lineup is the massive, 15.5-inch touch screen linked up to Ford’s new SYNC 4A intuitive interface — making their truck debuts on F-150 Lightning in the Lariat and Platinum series. The new Ford Sync system features include:

Driver front-and-centre is a 12-inch instrument cluster with flashy animated graphics and a customizable interface. All providing the vital stuff like regenerative braking status and hands-free highway driving mode info.

To learn more about the new interior, read our 2021 F-150 interior review here.

The first North American vehicle with the ability for seamless transitions between charging your vehicle and powering your house when needed, the all-electric F-150 Lightning will offer Ford Intelligent Backup Power — essentially, turning your pickup into a legitimate power source, seriously.

Courtesy of the optional 80-amp Ford Charge Station Pro and home management system, and based on an average 30kWh of use per day paired to the truck’s extended-range battery, this super truck can fully-power a home for up to three days, or as long as 10 days if power is rationed, with results varying based on energy usage.

The Lightning has the ability to offload 9.6 kW of power to juice up your home’s lights, appliances, security systems — and above all, the Nintendo Switch.

But in all seriousness, the truck’s backup power abilities can help serve those sheltering during a storm or other major disasters and events. And once home power is restored, the Lightning will automatically revert to charging its battery.

The company plans to roll out Ford Intelligent Power in the future, using the truck to power homes during high-cost, peak-energy hours while taking advantage of low-cost overnight rates

Outside the home, customers can power up other devices thanks to 9.6 kilowatts of power (standard on all trims from XTL, Lariat to Platinum). This works with the 2.4 kilowatts available through the front trunk and up to 7.2 kilowatts through outlets in the cab and bed.

This feature turns the F-150 into a proper road trip hauler, allowing more space to store all that stuff you can’t live without (without hogging valuable cabin space) — like a pair of golf club sets, or a pair of carry-on luggage with a checked bag, to be exact.

The front-loading trunk’s main features include:

Sure, every new vehicle is a ‘big deal’ for automakers as they tout this is a very big deal for our company. But, this new all-electric F-150 is indeed a big deal not just for the Blue Oval but for the storied F-150 that’s been going strong and breaking sales records for half a century now. Customer expectations will likely be high for Ford’s latest EV.

As Bill Ford puts it, “F-Series is America’s best-selling truck for 44 years (55 years in Canada), the backbone of work across the country, and a trusted icon for generations of customers. Now we are revolutionizing it for a new generation.” He adds, “For both Ford and the American auto industry, F-150 Lightning represents a defining moment as we progress toward a zero-emissions, digitally connected future.”

No doubt, the Lightning is a big deal. 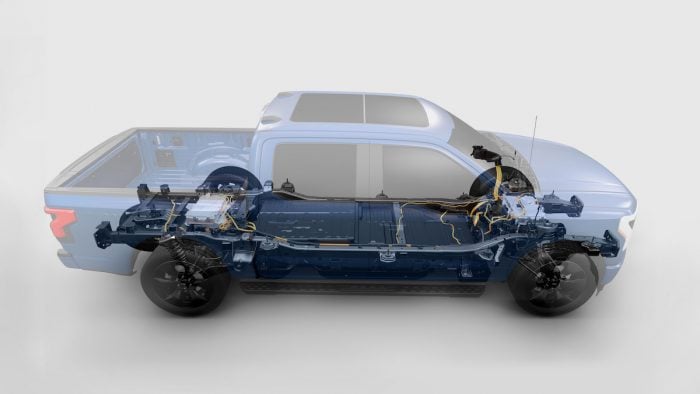 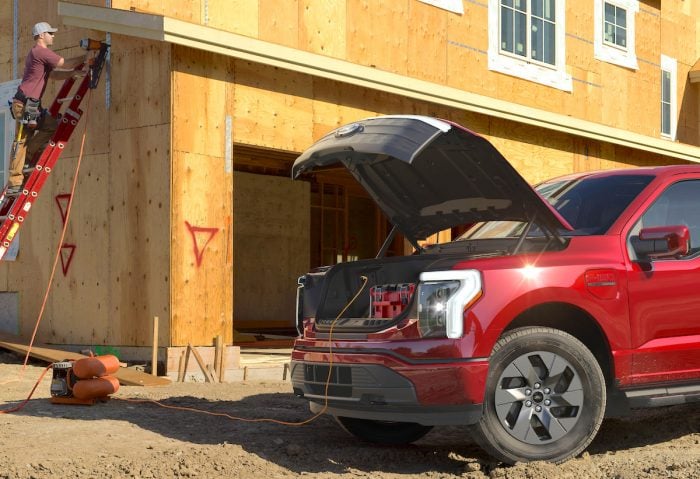 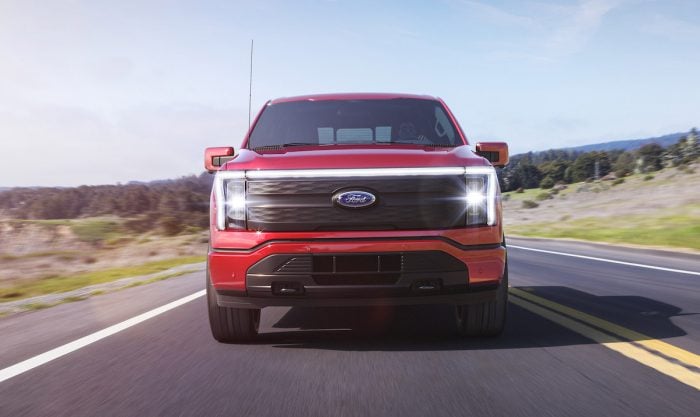 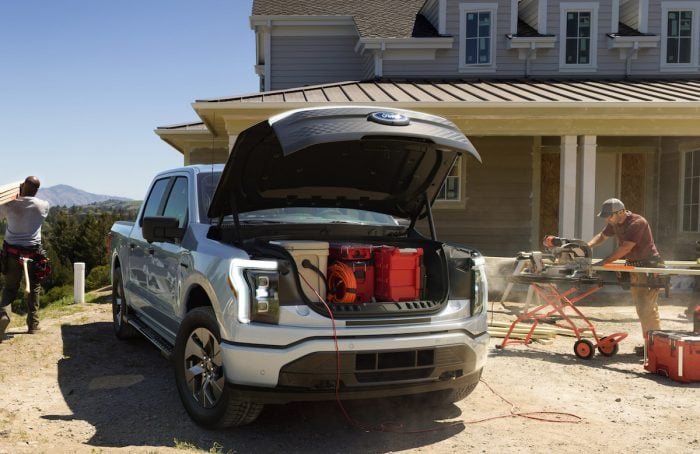 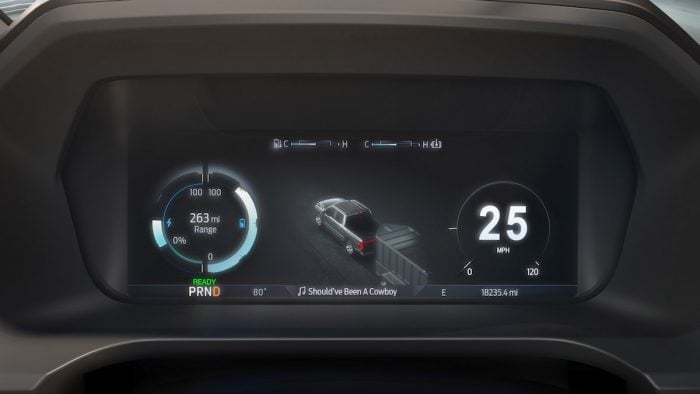 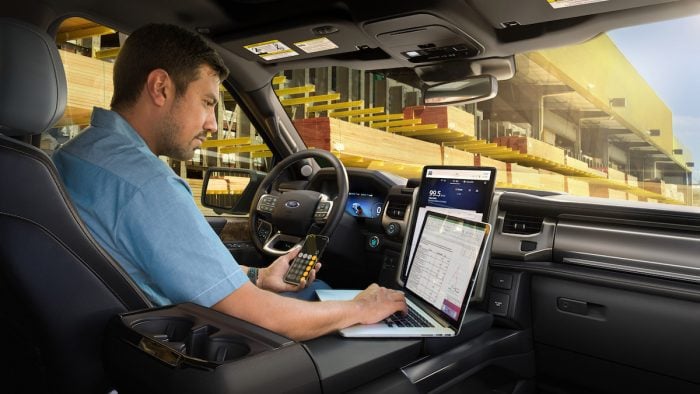 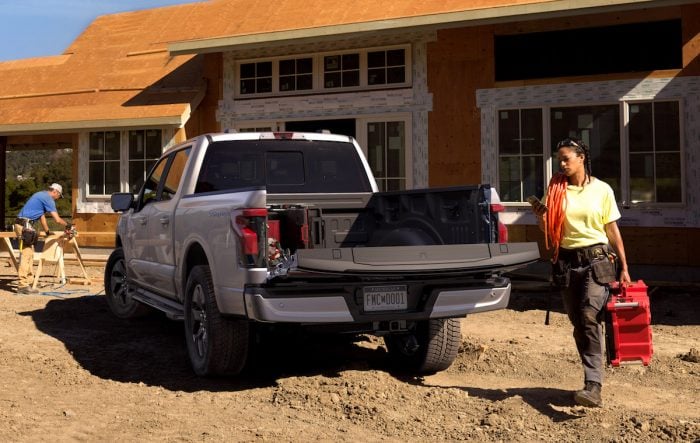 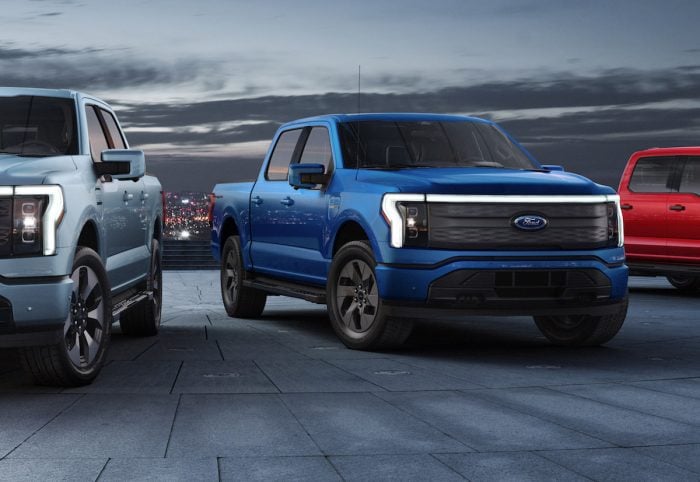 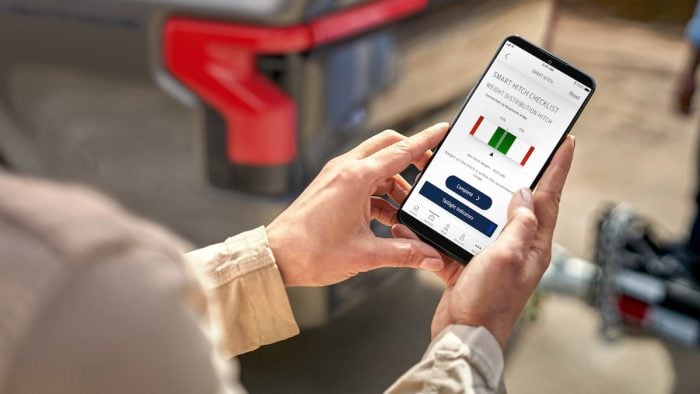 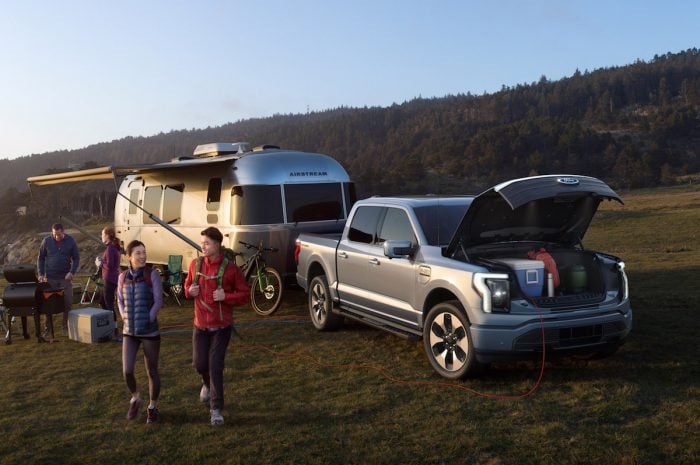 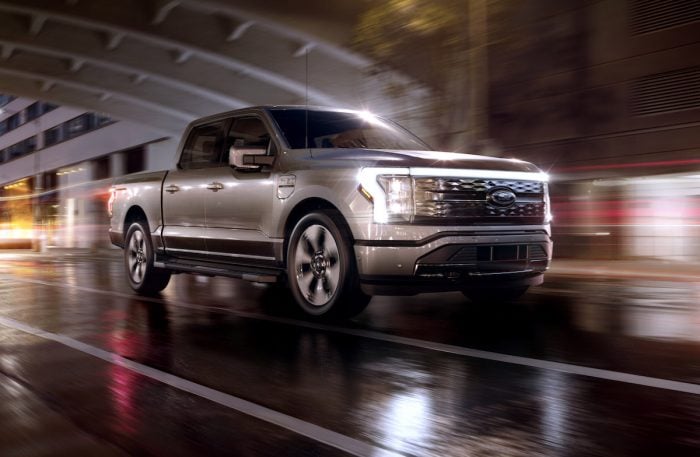 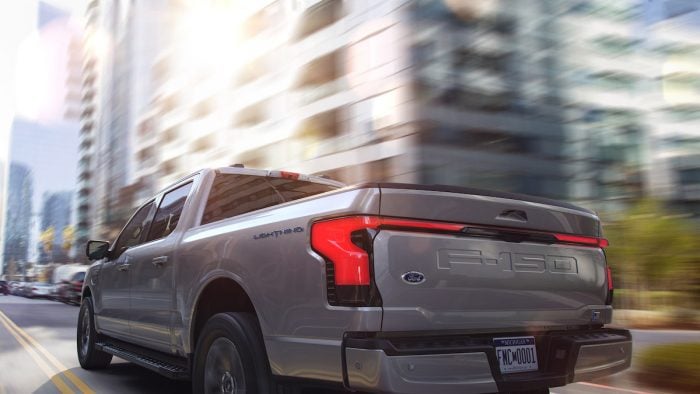 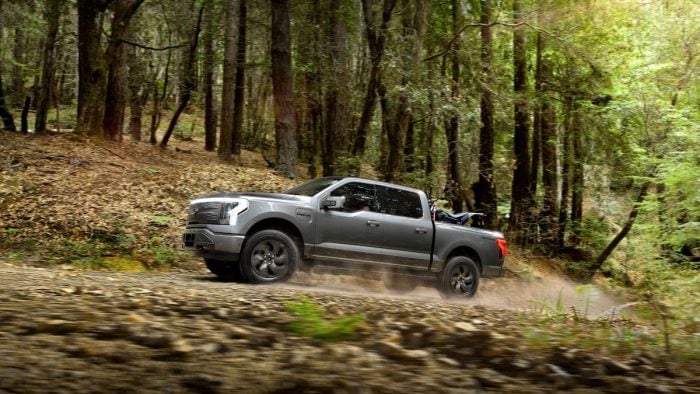 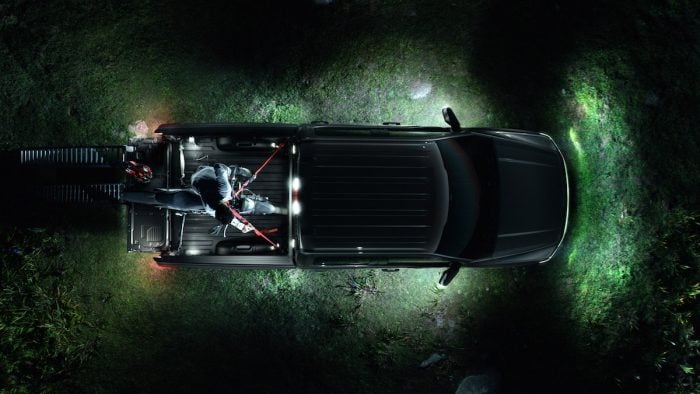 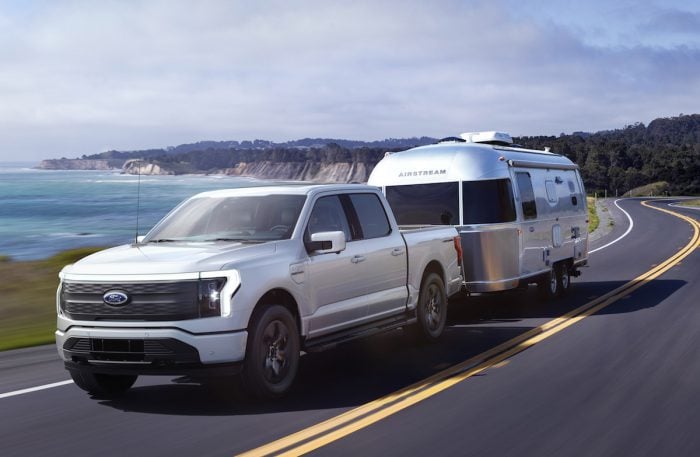 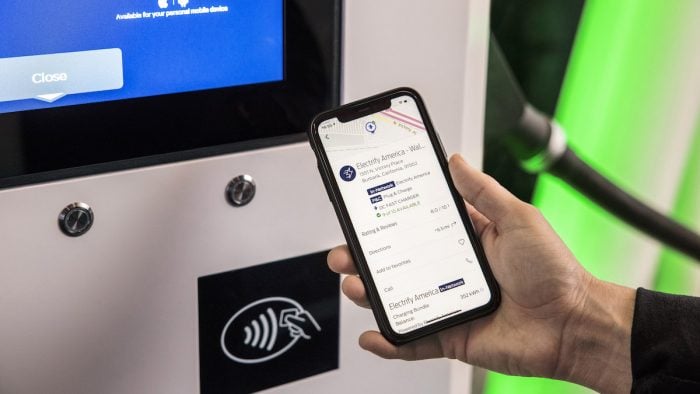 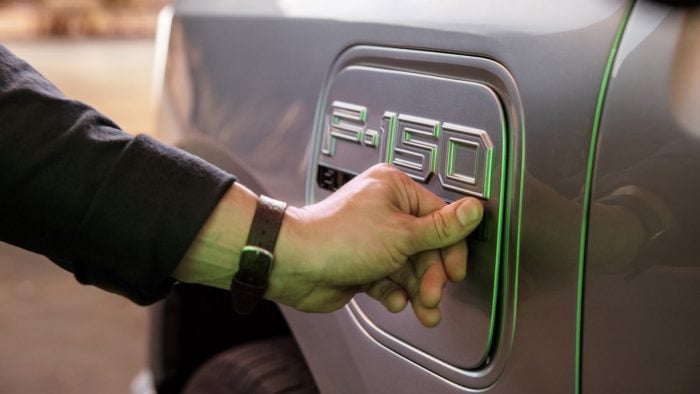 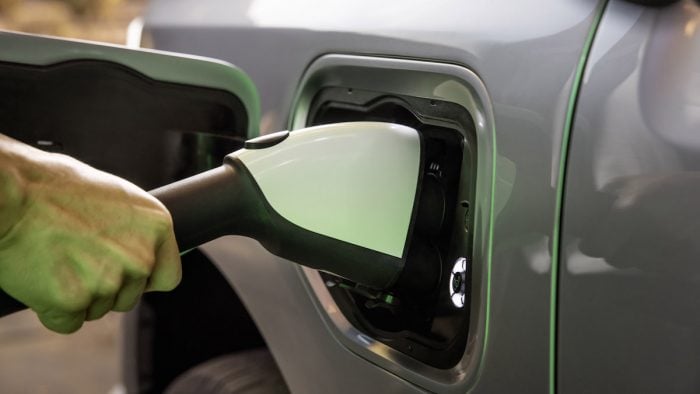 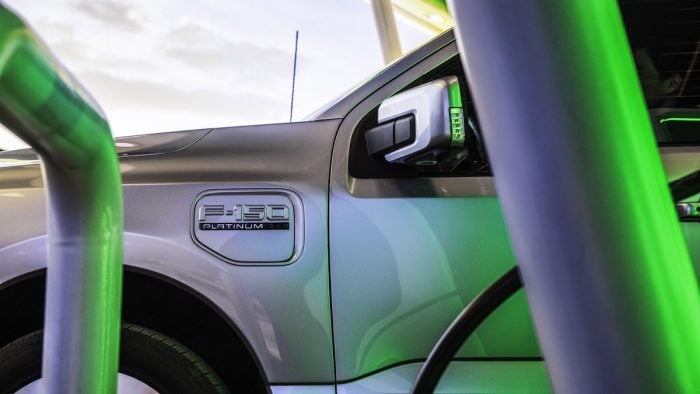