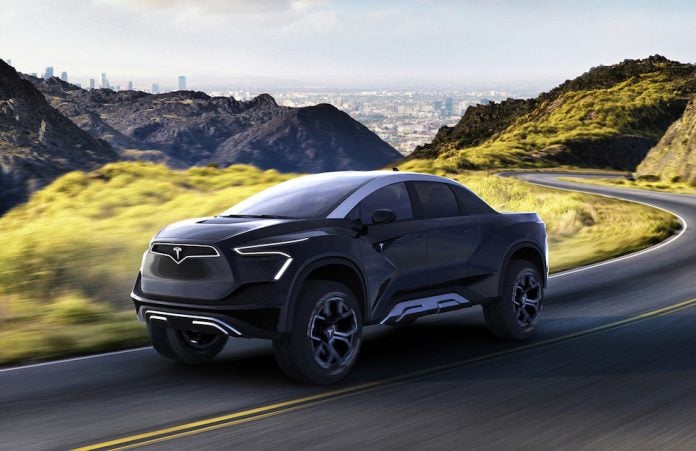 Tesla plans to unveil there first electric pickup sometime later this year. We’ve seen some concept renderings but nothing firm. Fortunately, we have Turkish-Canadian designer Emre Husmen to fill the imagination gap with this ultra-beefy yet super sleek Tesla truck concept.

If hitting the high seas if more your thing, check out this Tesla electric boat concept.

Considering mid-size pickups like the Ford Ranger and Chevy Colorado are gaining popularity these days, coupled with the move towards sustainability, fully electrified trucks offering utility like towing and hauling only makes sense.

Battery-powered trucks aside, the 2020 Jeep Gladiator is arguably the most popular mid-size pickup making noise right now, offering a category-leading 3,470 kilograms or 7,650 pounds of towing.

With California-based rival Rivian and their $70,000 R1T all-electric pickup getting loads of attention lately including a 500 million investment from Ford, news of a Tesla truck is finally picking up and getting us excited.

We know the R1T will sprint 0-60 in a mere 3-seconds, tow up to 5,000 kg, provide around 800 kg of payload, all with up 400+ miles of range. If Tesla can’t keep up with this, the trendsetting automaker may just have a handsome truck without the gusto – and that’s not a good thing. We’ll know more once the production model is officially revealed.

Concept truck we hope makes it

The front and rear fenders dive into a pair of small doors for a narrow waistline; sleek and futuristic headlights and taillights round out the look.

Tesla will make an official announced of their production-ready electric truck later this year, but if it looks anything like Emre Husmen’s concept backed by real-world performance, we’re pretty sure Tesla fans will rejoice.

Check out more of Husmen’s work at Behance.

Up Next: How Do Electric Cars Works | Everything You Need to Know About EVs

Studded or non-studded: the choice is yours. We put the new Continental IceContact XTRM winter tire to the test. Here's our full review.
Read more
Ford Bronco

The Beast E-Bike by Daymak is Rugged yet Street-legal