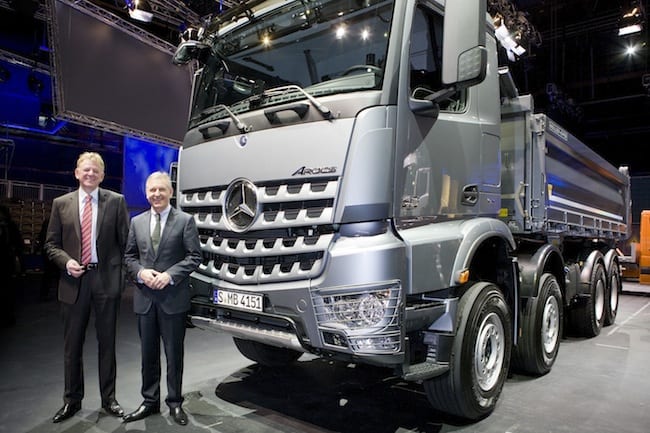 The new construction vehicle family from Mercedes-Benz: Arocs – the new force in construction Mercedes-Benz has achieved a triple leap forward in the field of Euro VI compliance: this year the brand with the star is expanding its current heavy-duty vehicle range with the addition of the Arocs, the specialist in construction, which follows hot on the heels of the Antos, which celebrated its market launch in the heavy-duty short-radius distribution sector in 2012, and the Actros, which celebrated its market launch in the long-distance transport sector in 2011. In addition to maximum environmental compatibility thanks to Euro VI, the new Arocs vehicles also boast three outstanding qualities: power, efficiency and ruggedness.

The Arocs range is being offered in a previously unparalleled variety of vehicle models to precisely match customer requirements in this extremely diversified application sector. The new dump trucks, all-wheel drive dump trucks, cement mixers, semitrailer tractors and dropsider chassis vehicles are available as two, three and four-axle vehicles with 16 power output levels ranging from 175 kW (238 hp) to 460 kW (625 hp). From the outset, all of the engines have been designed to meet the future Euro VI emissions standard and are available to order as Euro VI versions.
The clearly segmented building industry sector requires vehicles which are ideally matched to their operating conditions. Around half of all construction vehicles work directly on construction sites. Around a third deliver equipment and building materials to sites, while a further 15 percent of construction vehicles are involved in handling ready-mixed concrete.
On top of this, there is also a wide variety of requirements when it comes to the means of transport used in ancillary construction trades or the ultra-heavy-duty transport sector. And public service vehicle operators also require tailor-made vehicles too.

At the same time, a reduction in fuel consumption of around two percent is achieved under high load. These demanding conditions are typical of the areas of application in which the OM 473 is used.
In addition, the new Mercedes-Benz OM 473 also impresses with its tremendous economic efficiency: even the most powerful engine of the new engine generation has been consistently developed for low fuel consumption. Depending on the version, consumption is between 0.5 and 1.5 percent lower than the preceding model, the V8 Mercedes‑Benz OM 502.
It also goes without saying that the engine features maximum environmental acceptability: all variants of the OM 473 meet the strict Euro VI emissions standard applicable to registrations from 2014 onwards.

The new OM 473 is available with three power output levels:

Under the Acros hood

Slotting in seamlessly below the new Mercedes-Benz OM 473 diesel engine is the previous top-of-the-range variant of the new engine generation, the OM 471, producing a maximum of 375 kW (510 hp) and 2500 Nm of torque from a displacement of 12.8 litres.
This engine covers a broad range of applications within the new Arocs vehicle family. The long-stroke in-line six-cylinder engine (piston stroke: 156 mm, cylinder bore: 132 mm), which made its debut in the Actros long-distance truck, was the first model in a completely new engine generation in 2011.
Its effective full-load engine speed range extends down to around 800 rpm, which is particularly important for the off-road applications for which the Arocs may be used. The engines provide close to their full power output as low as 1400 rpm.
Learn more – Acros