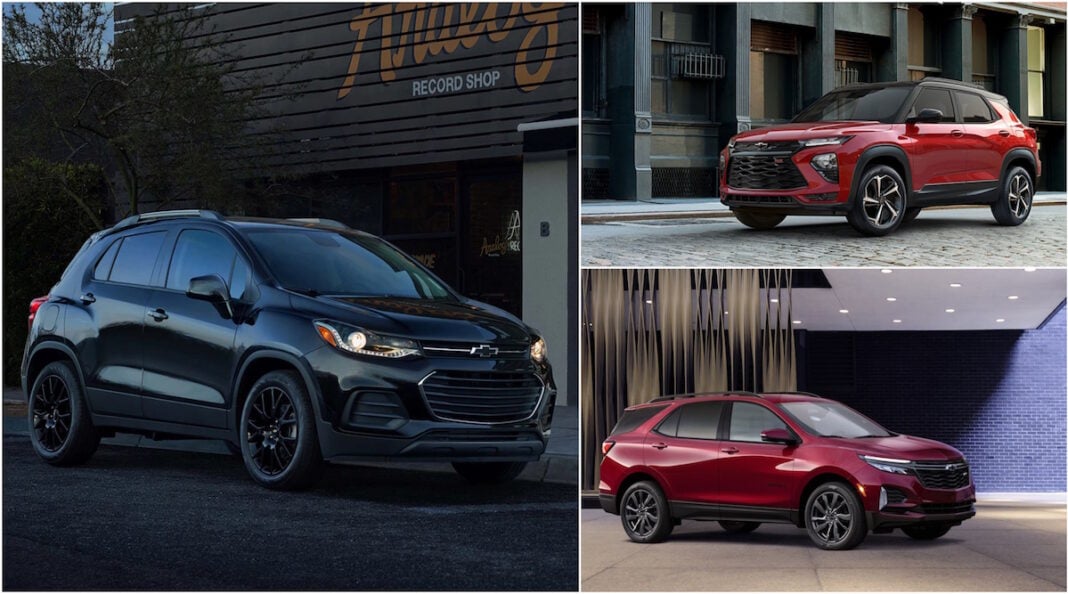 Chevrolet’s lineup has transformed over the past decade. If you haven’t been paying close attention, you may not realize the nameplates that have come, gone or have been updated.

With that in mind, we want to (re)introduce you to Chevrolet’s crossovers and small SUVs, exploring what you can expect from each.

As buyers continue to flock to the compact crossover/SUV market, we’re seeing more and more sedans bite the dust. The Trax has been on the market for almost a decade, and it—along with the others on this list—is part of the reason Chevy axed the Cruze, which was a lauded compact sedan. Here’s a review of the original 2013 Chevrolet Trax.

When you experience the Trax, however, it begins to make more sense. I remember driving the Trax when it first launched and thought it would be a perfect little vehicle for the big city. Its small footprint offers drivers something they can easily maneuver in tight situations, with added height and cargo space to boot.

What the Trax may lack in styling—it looks fine enough, but doesn’t illicit the same reaction as others in the Chevy lineup—it makes up for in a fun, peppy drive with its 1.4L turbo engine that delivers 138 HP.

While Android Auto and Apple CarPlay are commonplace these days, even in entry-level vehicles, WiFi hotspots aren’t, which is a nice little add-on for the Trax.

The Chevy Trailblazer returns to slot itself in the tweener SUV spot, between the Trax and Equinox. The nice thing, however, is that there’s more leg and headroom than you would expect. It comfortably fits five, which might be a bit of a squeeze in the Trax.

Two-tone roofs are all the rage in the compact SUV segment, which Chevy includes with the Activ and RS trims. It’s worth it. Why? Because it looks so damn good. There’s something about the little, truck-like side profile of the Trailblazer, with the two-tone colour, that really brings it to life.

Under the hood, Chevy opts for their 1.3L turbo engine capable of 155 HP, which is paired to a nine-speed automatic transmission.

While Chevy, along with most automakers, cascade their features throughout their lineup, Chevy’s top-notch technology integration and design really begins to stand out in the Equinox.

It’s not incredibly flashy, with a fairly standard infotainment screen, but it works incredibly well without much of a learning curve. Expect to find everything from lane-keep assist to automatic emergency braking with pedestrian detection included in the Equinox.

The styling also comes to life when you choose the Equinox Midnight Edition. While the other iterations look fine, the Equinox looks that much better in black. This edition goes beyond black, including a unique black grille, 19-inch black wheels and black bowtie emblems.

Chevrolet does have larger SUVs available if your family is growing or you just want a little extra space.

The Chevrolet Blazer is a memorable SUV.

If it fits your budget, definitely jump to the 3.6L V6 engine capable of 308 horsepower It balances comfort with power without missing a beat. Here’s our review of the inaugural 2019 model.

Thankfully, the design and layout works incredibly well, so if the added power isn’t in your budget—or needs—you walk away with a hell of an SUV that marries a strong design and an expertly laid out infotainment setup that most automakers should take a few cues from.

The Traverse has seating for up to eight, and has a number of clever cargo spaces throughout.

Features such as smart sliding and hands-free liftgate make it incredibly convenient, while the 3.6L engine capable of 310 HP gives you more than enough to get up and going on the highway.

The Tahoe gives you a little more flexibility, with seating for up to nine people. This means it can level up your next big family road trip.

Of course, that means more power—either a 5.3L pushing 355 HP or a 6.2L engine with a whooping 420 HP—which better pairs with its more boxy look and feel.

The biggest SUV in Chevy’s lineup, the Suburban also seats up to nine within its full-size frame. It shares the same drivetrain options as the Tahoe, and comes complete with a premium look and feel, which includes everything from an acoustic-laminated windshield to power-release second and third rows. The Suburban is also a old-school hauler that’s made a return in a modern guise.

Travis Persaud
Travis Persaud has contributed to a number of magazines across North America, including enRoute and Exclaim! He loves variety and it shows in the wide range of topics he’s covered: automotive to music, technology to travel, beer to real estate. He’s currently the editor of WHERE Ottawa (city travel guide), beer columnist for Ottawa Magazine, a frequent contributor to CAA Magazine and the former associate editor of Zoomer Magazine.
FILED UNDER:
New SUV & CrossoversCompact SUV & CrossoversSubcompact SUV Crossovers