Ford currently has 5 models in the lineup including the EcoSport, Escape, Bronco Sport, Edge, and Mustang Mach-E. 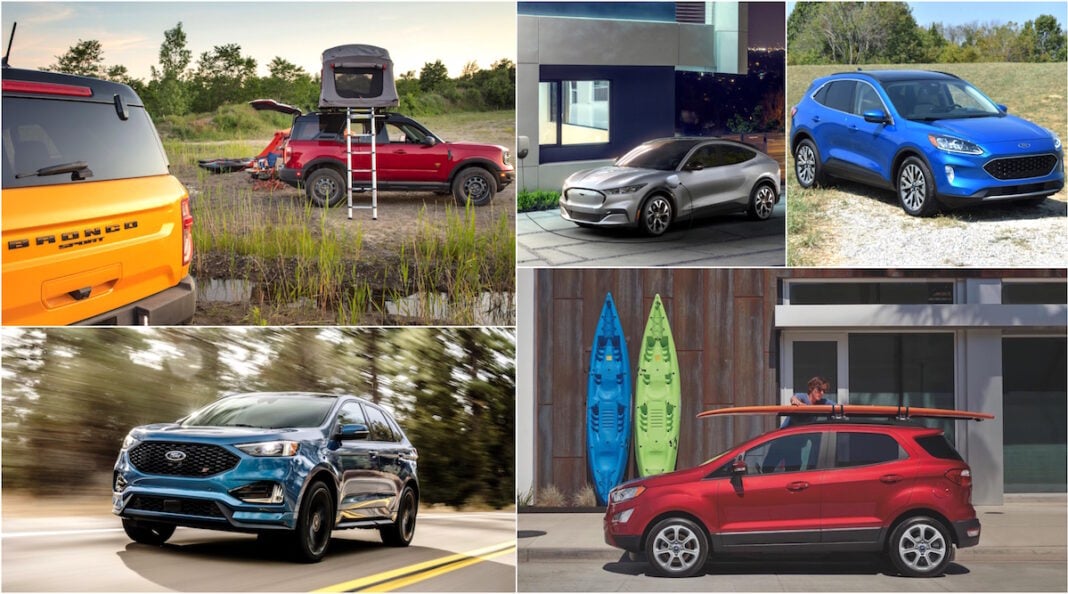 To get a better idea of these small Ford utilities, we sat down with Gonzalo Contreras, Product Marketing Manager SUV/CUV Canada, to learn more.

First, what do the EcoBoost, Escape, and Edge have in common?

Aside from the sporty, sleeker design, Ford ensured each model is packed with tech. Expect FordPass and FordSync across all three variants, including embedded modems with 4G LTE WiFi that connect up to 10 devices.

As Gonzalo puts it, “We’ve been listening to our customers all these years. We know they’re asking for all-wheel drive, driver assist technology, and other features that will make their lives easier. So we make sure to incorporate features that consumers actually want and value.”

The latest Escape and Edge both get a new rotary gear shifter which creates more space and cargo up front; Co-Pilot 360, a suite of 5 primary safety features, are also standard in these two models.

So, let’s take a look at the Blue Oval’s 5 smaller SUVs.

Latest Generation: the EcoSport is currently in its second-generation since 2012.

The Ford EcoSport falls into a growing segment with new entries every year. Not as hyper-competitive as the Escape’s small utility market, but these mini crossovers could be next. They’re small and affordable but automakers cram them with features while focusing on cargo space which is why they’re so appealing. Check out our 2018 EcoSport review here.

As people move from cars to crossovers, compact utilities like the EcoSport make sense. From young buyers to inner city types looking for an easy to park vehicle with a higher ride height offering security and confident driving dynamics will gravitate to this one.

As Contreras puts it, “EcoSport is a great alternative for customers moving from cars to crossovers. It’s also a great entry level vehicle for those new to the Ford brand, and good option for loyal customers looking for a smaller package wtihout the compromise.”

Plenty of contenders in this space, including newcomers like the Nissan Kicks and Hyundai Kona. Other competitors include the Honda HR-V, Chevy Trax and Mazda CX-3 that have been on the market for awhile now, along with the more premium Buick Encore.

Latest Generation: the Escape gained a complete redesign for 2020, entering its fourth-generation.

The 4th-generation Escape is completely new for 2020 (check out our full review here), competing in the hyper-competitive small crossover field with another 20+ players. So, you’ve definitely got a lot of choices in this segment.

But aside from the F-150 pickup, the Ford Escape is the brand’s top-seller and 12th top-selling vehicle in the US alone, so that should tell you something.

“The redesigned Escape delivers the best-ever performance, flexibility, and many driver assist technologies (Co-Pilot 360) that customers are looking for in this segment,” Contreras tells us. The Escape is one of the only small SUVs offering a hybrid and PHEV, alongside the new Toyota Rav4.

Again, the Escape is up against some heavy-hitters in this way-too-crowded field of small haulers. Including the Honda CR-V, Toyota Rav4 that’s all-new this year, the Nissan Rogue, and Mazda CX-5.

Latest Generation: the Bronco is all-new after taking a long break; the 2021 Bronco is the first year, arriving at dealerships early 2021.

When Ford put together its plan for the Bronco’s comeback, it identified the need for a smaller model below the main 2- and 4-door off-roader – something that was more of an everyday vehicle for a customer base evenly split between male and female buyers. And while the Bronco Sport may share DNA with compact SUV sibling Ford Escape, the similarities end there.

The Bronco Sport Badlands – the most off-road focused grade available, much like Jeep’s Trailhawk trim – gets 8.8-inches of ground clearance, which is an inch more than the Escape and contributes to competitive departure, approach and breakover angles.

End of the day, the Sport will likely be the Ford Bronco‘s volume selling model for everyday consumers looking for an Escape with more off-road capabilities.

To learn everything about the new arrival, read our full Bronco Sport overview here.

Due to its more off-road persona, the Bronco Sport doesn’t have a lot of competitors. But the most notable would include the Toyota RAV4 TRD Off-Road, Jeep Renegade, and Subaru Crosstrek.

Latest Generation: the current Edge remains in its second-generation since 2015, but saw a hefty facelift in 2019 which includes the burlier Edge ST (seen in pictures above).

Produced in Oakville, Ontario, technically the Edge doesn’t fall into the small category, but we know shoppers will cross-shop it with the other two before even considering the mid-size Explorer.

This smaller 5-passenger SUV is primarily for those consumers, as Gonzalo puts it, want to reward themselves and want more car. They could probably get away with an Escape but the Edge’s larger footprint with extra features, more cargo, and overall bigger stance appeals to urbanites and perhaps small families. The Edge’s styling is more robust too when compared to the Escape.

“There was a wide space in the medium suv segment for performance and the Edge ST is filling that gap and has been very well accepted by our customers who appreciate all the attributes the Ford Performance team added to the vehicle.”

The Edge is up against three main contenders – all of which are completely new and completely different in terms of styling with the Nissan Murano, Chevy Blazer, and Honda Passport.

Latest Generation: 2021 is the first year of the new Mach-E.

Say hello to Ford’s first-ever all-electric vehicle, which happens to be a 5-seat SUV in compact form and part of the Mustang family.

Mustang Mach-E rims includes the First Edition; Select available with either AWD or RWD sprinting 0-60 in the mid 5-second range; Premium offering more technology, luxury, and performance on this mid-level trim; California Route which only comes in RWD rolling on 18-inch wheels but gets an extended battery range and EPA-estimated range of 300 miles, according to Ford; and the range-topping GT rocket accomplishing the 0-60 in under 4-seconds, riding on 20-inch wheels, and only shipped with AWD.

To learn more, check out our Mustang Mach-E page here.

There you have it, Ford’ current lineup of smaller utility vehicles. The entire SUV market is exploding but Ford has done a good job offering shoppers a variety – from the small EcoSport that has done especially well in other markets including Brazil, to a worthy off-road crossover with the Bronco Sport and all-electric option with the stylish Mustang Mach-E.

Of course, the Escape will continue to be a best-seller, especially in its current generation which also comes with a hybrid option, along with the Edge ST which is arguably one of the best sport compact SUVs on the market outside of the premium crossover segment.